SGGS Arts Collective - A Round Up

Our Arts Collective Stretch and Challenge put together some words about what we've done this year and about how they made the flowers displayed on the centre lawn...

As part of the Arts Collective we decided to set up a Stratford Girls Grammar School Radio Station. As part of this we had to be really organised in what we wanted our sketches to be. For around 5 lessons we were drafting sketches and deciding what to include. We came up with a variety of ideas such as what songs we wanted to include and the playlists. Some examples of these playlists were a summer playlist, a revision playlist and a chill playlist. This part of the process was fun, being able to listen to different genres of music that we wouldn’t normally listen to. Furthermore, being able to anticipate what people would like to listen to in the upcoming months, such as during exam leave was interesting and was something that we were passionate about.

After choosing the music we then had to decide what people would do which roles. This was flexible, we decided on 5 people to do the talking and essentially be the ‘anchors.’ We then designated an editor, who would make the jingles and edit our podcasts. Next, we decided what we would want to talk about and what students at the school would like to hear. We chose to incorporate some debates and to make the radio station fun but will inform students about what is going on in school and the notices. We wanted the podcasts to be broadcasted in tutor time. After we had decided the contents of the podcasts we then planned to visit Tyler House that has equipment needed for the radio station. Prior to this, in order to maximise the opportunity of having access to radio station equipment. We practiced numerous times in school which worked in our favour when we did visit Tyler House. We practiced a debate on veganism and our EPQ’s. The first time we visited Tyler House we recorded our jingle which was a success. After this we decided to visit again and manged to record a full 30min sketch with songs.

One of our first projects as the Art Collective was organising the Alice production in the winter term. We produced the signs, lobster claws, the lamps and kitchen utensils- using painting, origami and hot gluing skills! It was really rewarding to be a part of such a unique and successful production and was a great way for us all to get to know each together at the start of the year. We also used the opportunity to create some profit for the group. We sold over 100 homemade jam tarts to the audience, and lots of handmade necklaces. We had spent the last couple of weeks producing the necklaces, using shrink plastic to make charms in keeping with the production: cards, hearts and teacups.

We made over £100 in profit to spend on a radio licence at Tyler House in Stratford.

In preparation for our annual Music At The Manor event, we were given the task of creating an installation for the centre lawn. We wanted to liven up the lawn with splashes of colour, whilst also being eco-friendly. As a result, we decided to create a display of flowers made out of recycled plastic bottles. A handful of us went bin-diving in order to source the bottles as well as putting a box in the canteen for everyone to recycle their used plastic bottles. Our flowers were created by cutting the plastic bottles into flower shapes, and then we spray painted them in neon colours so that they stood out against the lawn. Although we found this task very time consuming and many of the bottles were hard to cut, the end product was rewarding because it was well received by the rest of the school and we think it looked amazing, with a real impact. 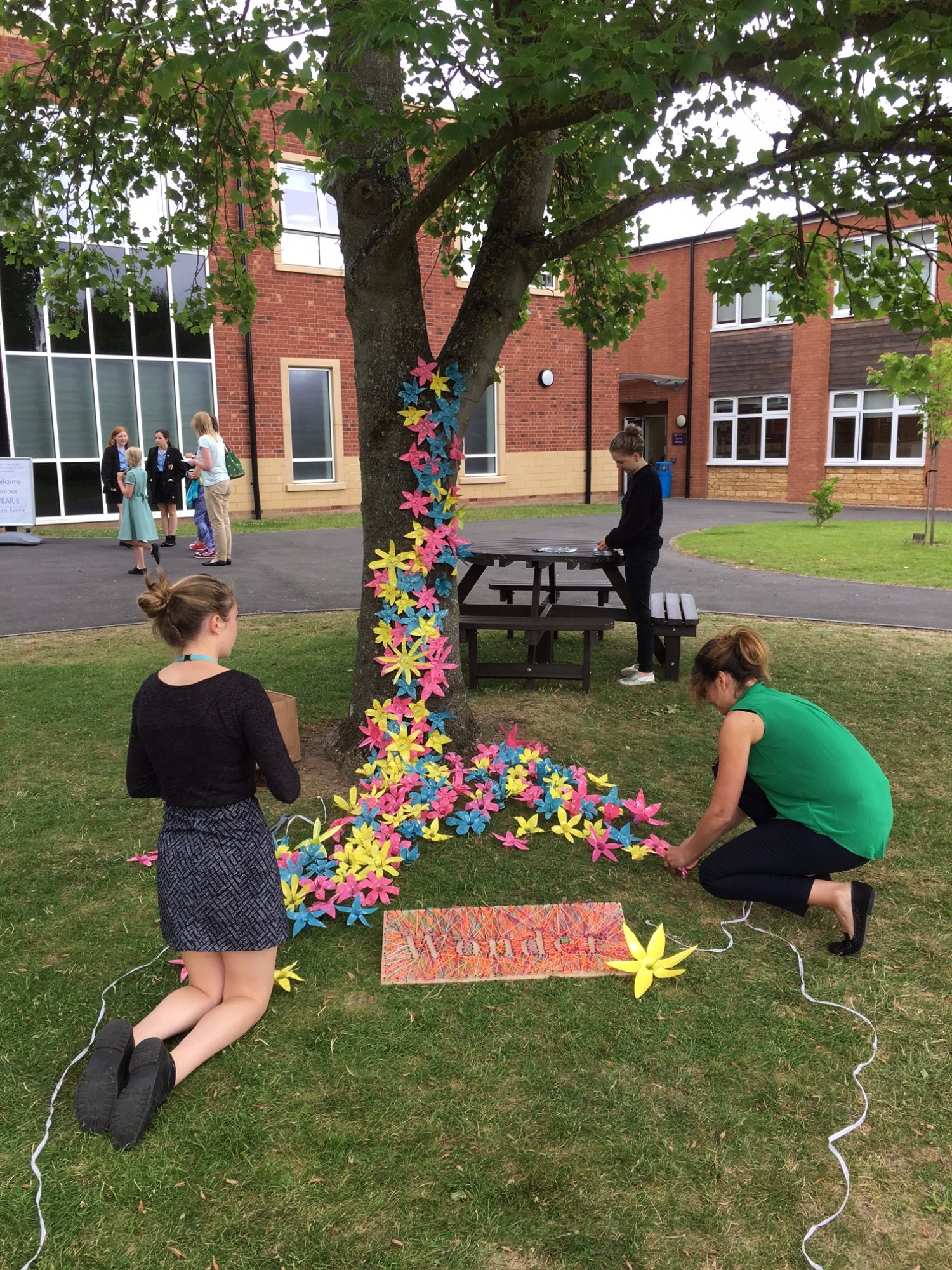 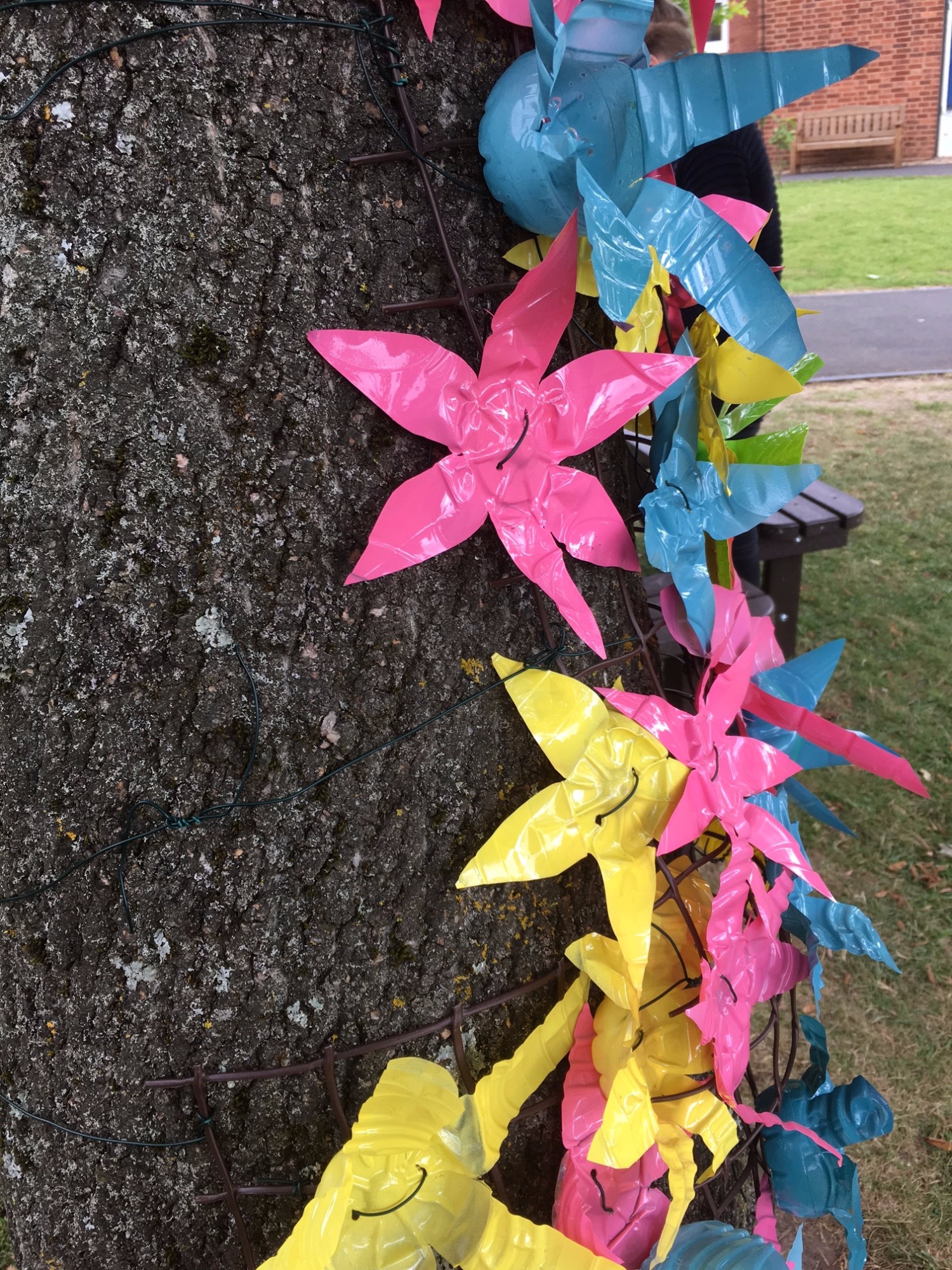