After her GCSE English Language assessment caught the attention of her friends and family, Fatima Dambatta received a personal invitation to speak at this year’s national ‘STAND UP Schools' Human Rights Conference’.

In today’s blog, Fatima proudly showcases her inspirational efforts to raise awareness about a topic that is very close to her heart. 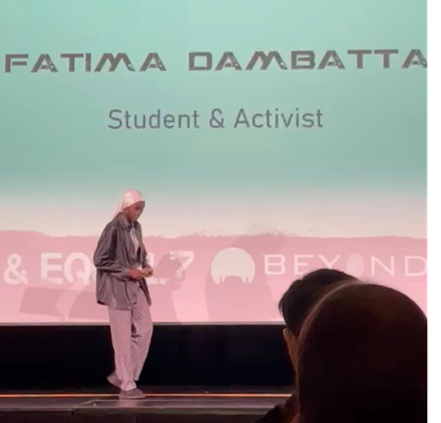 In 2020, George Floyd’s murder and the global Black Lives Matter movement that gained more momentum as a result finally brought the topic of inequality and racial bias into the limelight. The shock from this injustice rippled all over the world and resonated with so many.

As a black student and after the events of May 2020, it meant so much to me to find a place where I, and other students, could talk about our experiences as people of colour and invite others to learn and hear about our reality. The SGGS change committee provided the platform to voice our own feelings in an environment that encourages diversity and has made a really positive impact by giving us the resources to educate ourselves and others on how we can implement change.

The mistreatment of so many other black people fuelled our passion to speak up and gave me the courage to use my GCSE English Language speaking assessment to express my feelings and talk about my experiences of racism and micro-aggressions so that I could feel heard.

My desire to speak out came from a deep-rooted commitment to address inequality and strong values imparted from my Mother, who was so touched by my powerful performance that she decided to share the video with her friend, who is also black and so could relate to my experiences so painfully. My speech overwhelmed them with emotion as it portrayed what so many people of colour are made to go through in this country. This later resulted in them sending the video to the event managers of the ‘STAND UP’ conference at Lytchett Minster School in Dorset. Shortly after, I was approached by the organisers with an invitation to attend the conference and talk alongside some extremely inspiring people, each talking about different aspects of the Black experience. This was a very proud and surreal moment for me, and I am so great full for the opportunity I was given.

Take action for a better future

Before I spoke, I was overwrought with emotion because of the weight of what I was talking about. I wanted our experiences to be understood and for the impact to be felt, but as soon as I started talking, the words flowed out exactly as I’d prepared, and before I knew it, it was all over. Talking alongside some of the most inspirational people I had ever met was such an honour and although the stories that connected us were frustrating and unjust, it was good to feel like I wasn’t alone and one of the best feelings I’d ever had was knowing that we were speaking to bring change.

Over the day, speeches and performances were made by a variety of people across multiple generations, including a poem from an 8-year-old girl, and also on topics like the history of Notting Hill festival, the Colchester Black Lives Matter protest and even family tragedies. I was greatly inspired when I met the 21-year-old university student who spoke on how she’d organised the march and how she helped the more than 1000 attendees peacefully march and protest to make an impact.

The entire conference was streamed live to secondary schools and sixth forms across the UK, to invite students across the country to explore and delve deeper into racial inequality and learn how to take action to build a fairer future. It was an incredible experience for me and was my proudest academic achievement to date.

With the support of my friends, family, teachers and fellow change committee members, I was able to speak up, make an impact and contribute to a better future. My desire to speak on social issues has continued to flourish, and I look forward to attending more seminars soon. With the right platform and support from the right people, I know I can make a positive difference and change to help battle against inequality.