In today’s blog, Ellie, a Year 11 Drama student at SGGS, shares her experience of a recent school trip to the theatre, reviewing the performance and giving insight into what it was like being back at a live performance after so long. 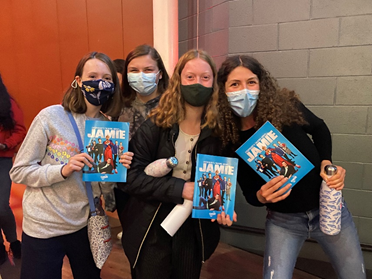 On the 22nd of September, the drama department was lucky enough to see the hit musical ‘Everybody’s talking about Jamie’ at the Leicester Curve Theatre. Everybody’s Talking About Jamie is based on a true story and is an inspiring musical following the journey of a 16-year-old teenager who wants to be a drag queen, overcoming prejudice and bullies as he finds himself and his drag persona. It is a celebration of acceptance and inclusion, family and friendship, truly bringing everyone who sees it together.

As the production began, with a sharp school bell and the lights dropping down, we felt theatre was well and truly back, hopefully, this time for good after so long due to COVID-19 restrictions. Layton Williams, portraying the titular character, captivated the audience, bringing us all many moments of laughter along with several teary eyes in the audience with his moving performance. One of my favourite moments throughout the show was ‘The Legend of Loco Chanelle’, as the owner of the drag shop, Hugo, played by understudy Rhys Taylor at this performance, explains the dramatic backstory of his drag alter-ego. It is a song filled with sass, extravagant dramatics, and an on-stage costume change we are all still trying to figure out!

Another aspect I loved about the production was the design, the transitions between scenes were weaved into the story seamlessly, as well as the set pieces themselves being exciting, enhancing the story and truly reminding the audience of the familiarity of the setting as we became immersed. The show was nothing short of spectacular, taking us all on a journey along with Jamie, until the closing number as we all stood up, clapping and singing along.

For the first school trip after the coronavirus pandemic, it was certainly one none of us will ever forget!