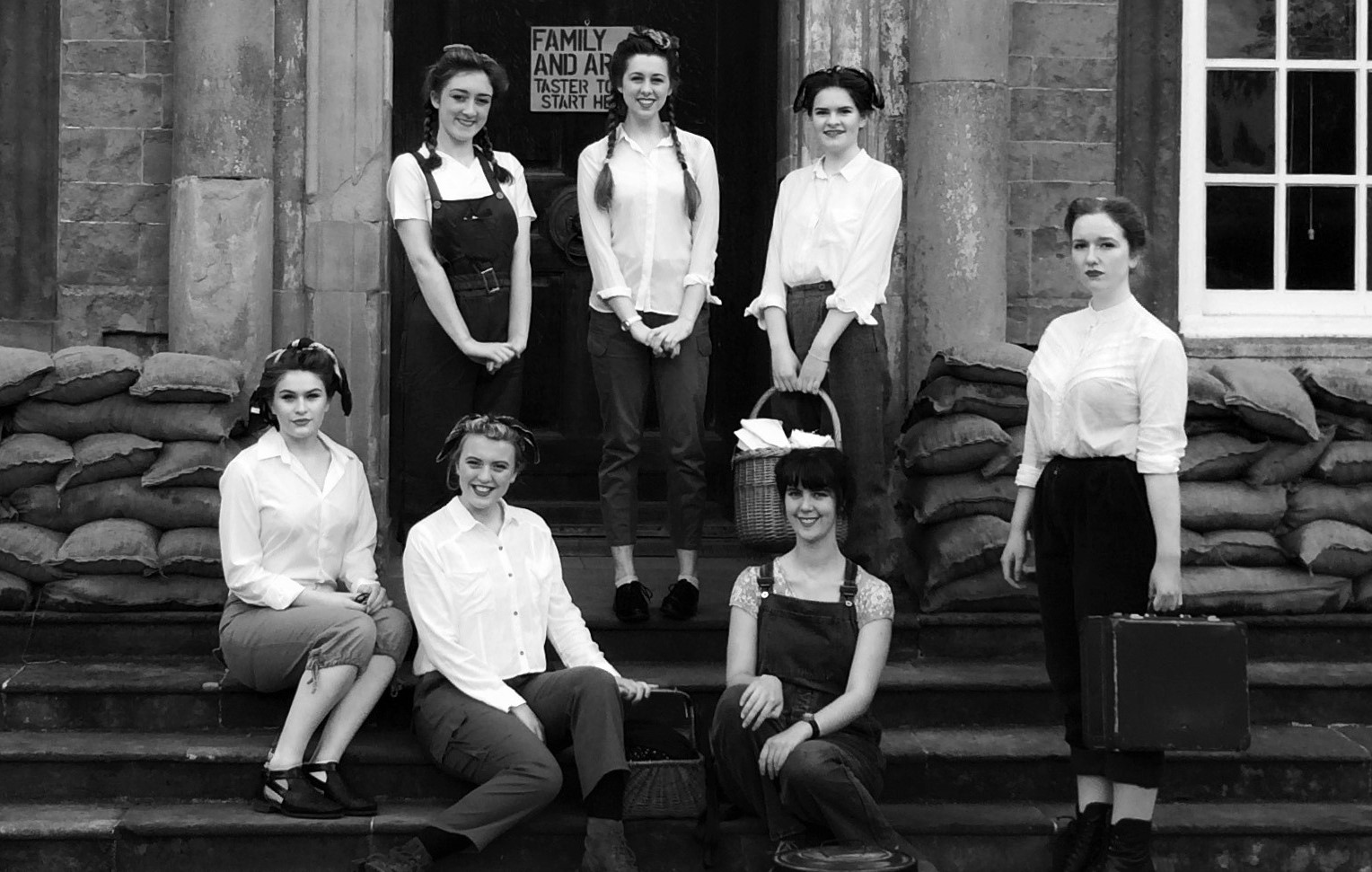 The Drama Department provide a large number of opportunities for students to perform. We usually rehearse for these at lunchtimes or during lesson times. Occasionally, rehearsals are run by sixth form students but usually they are run by Mrs Frater and Mrs Barrett, Joint Heads of Drama. 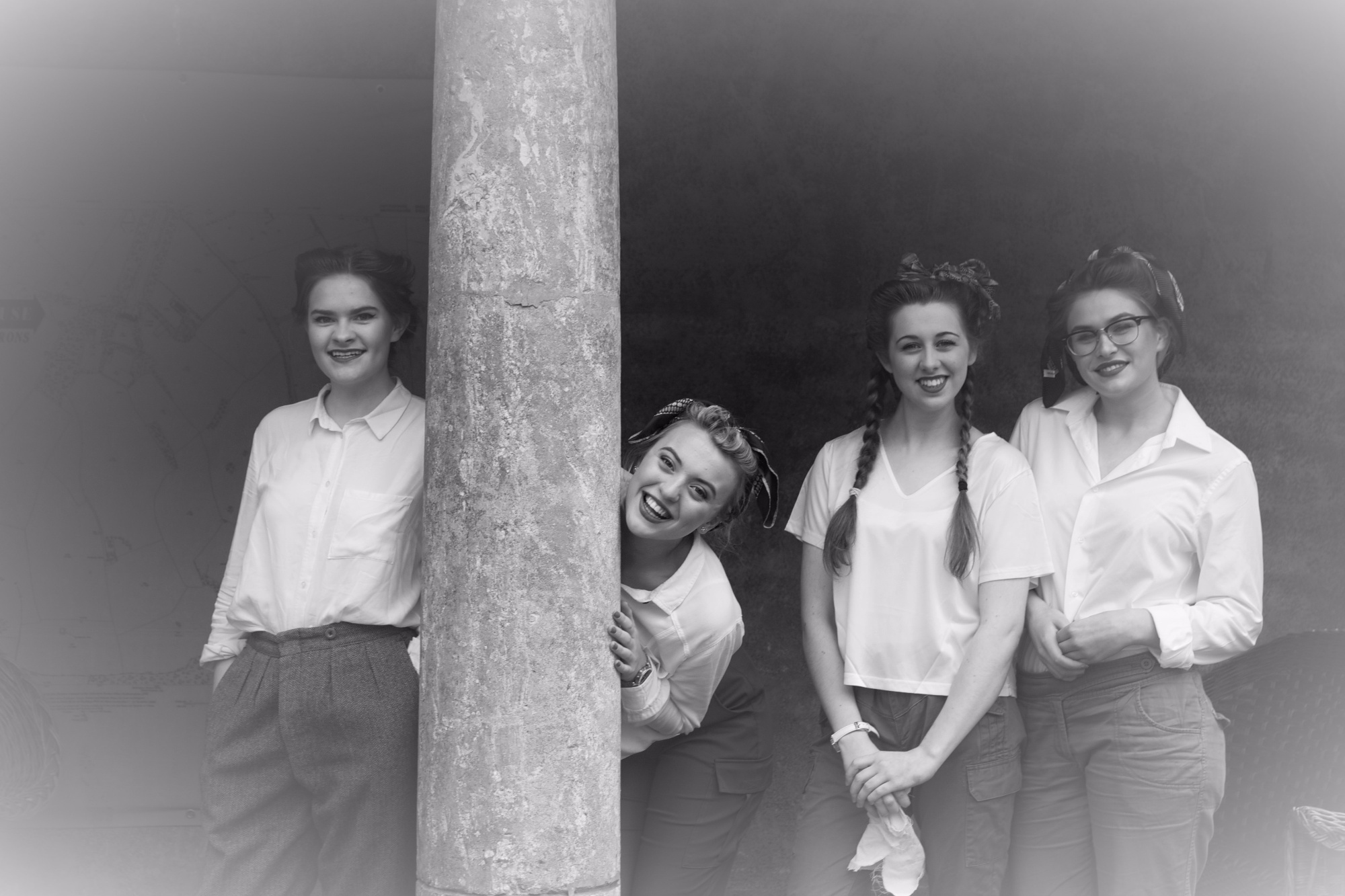 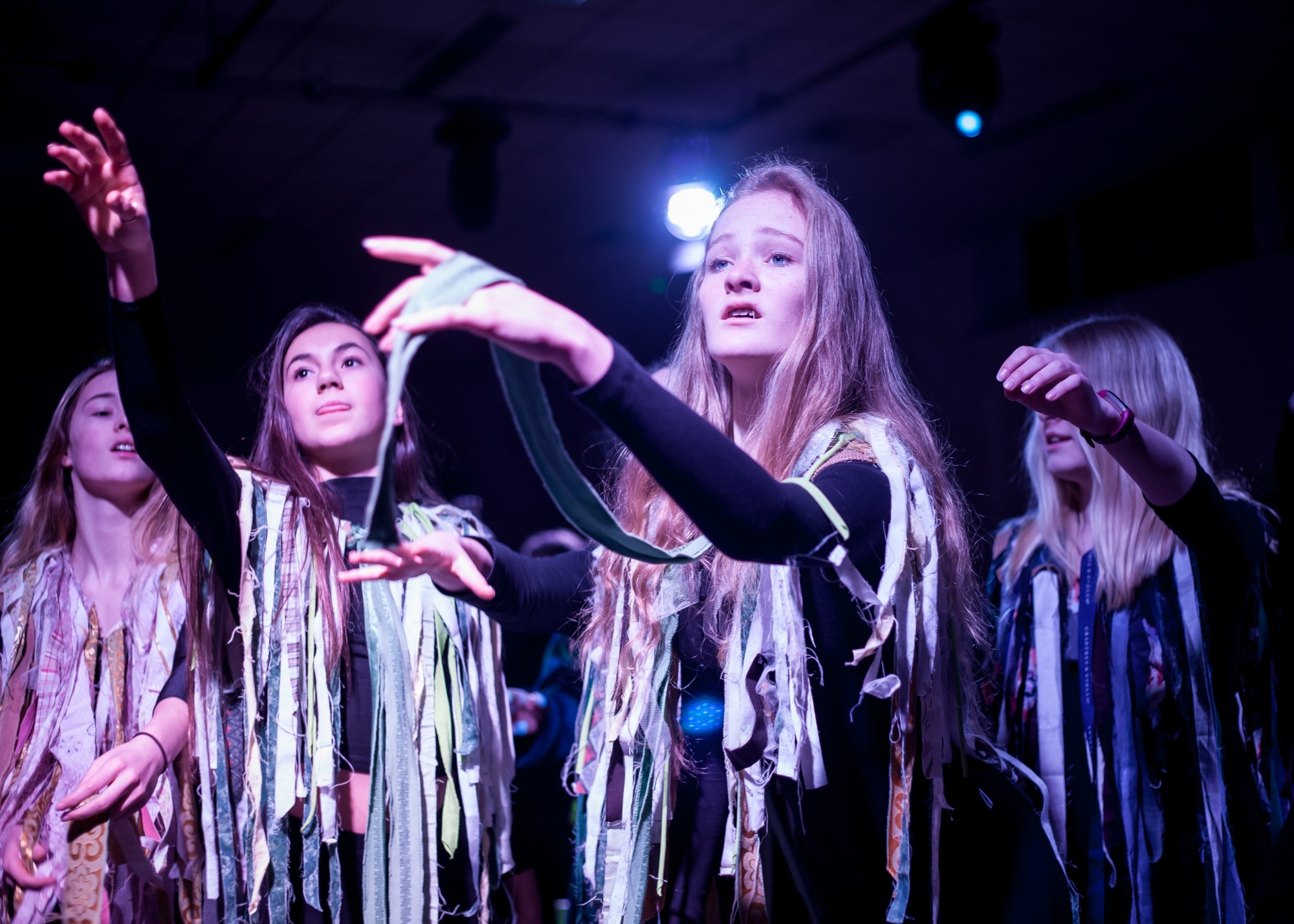 Please use the menu below to view photographs of some of our past performances: 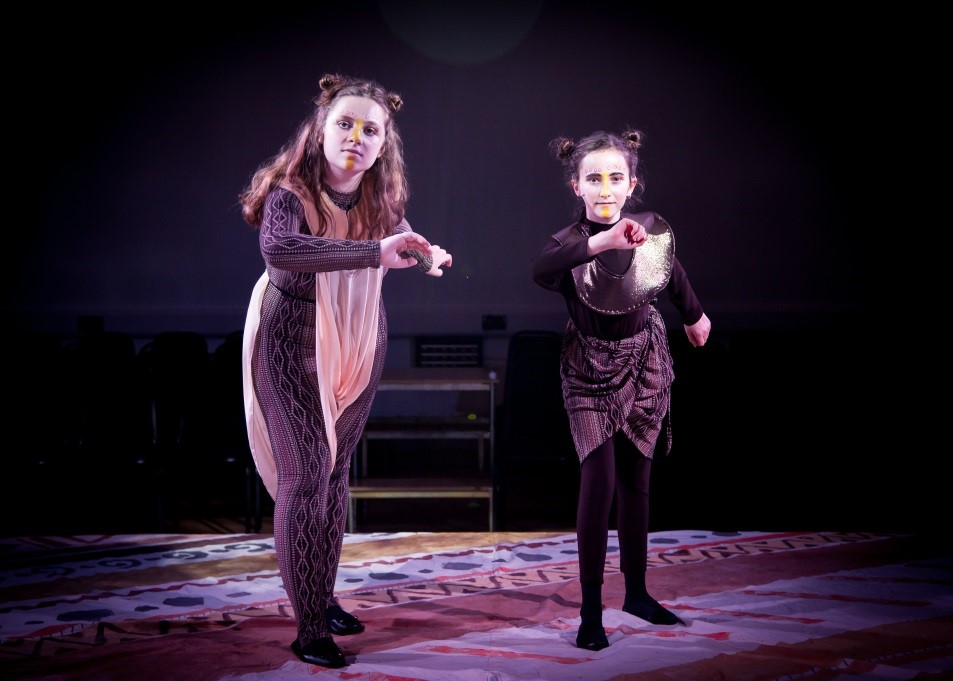 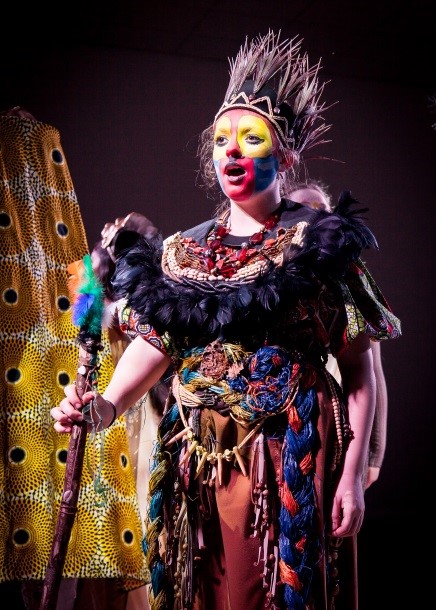 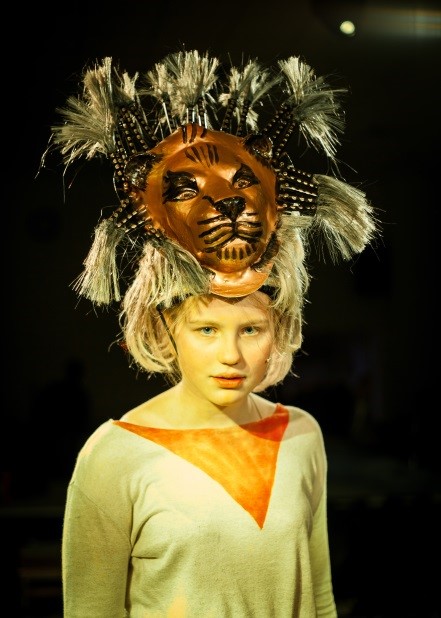 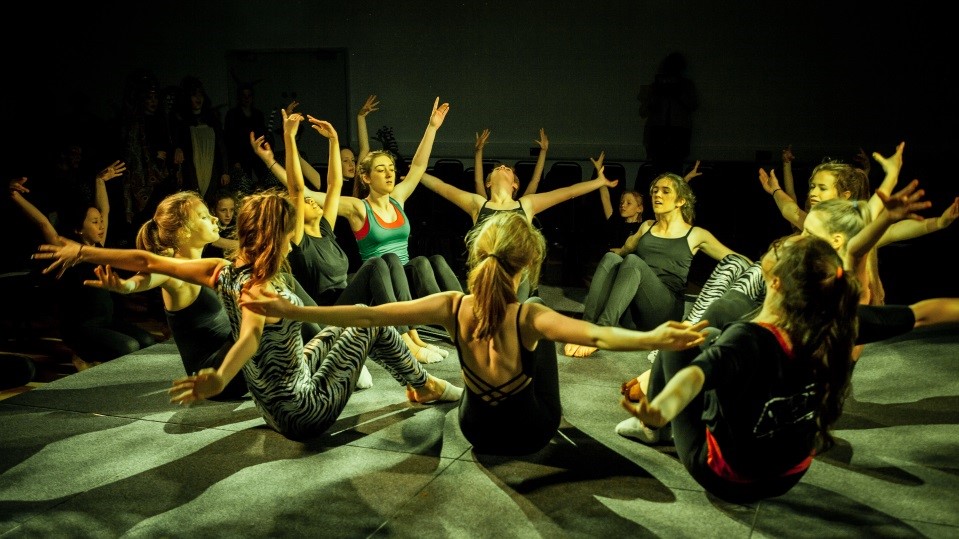 On stage at the RST for The Day of Celebration 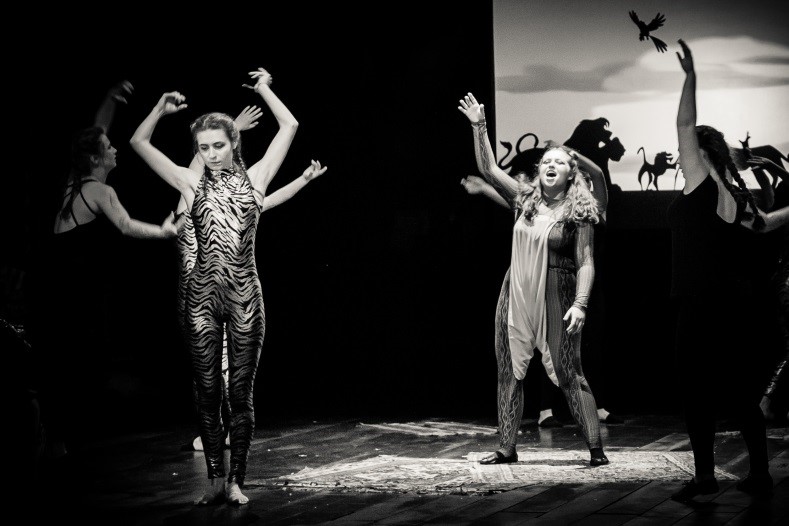 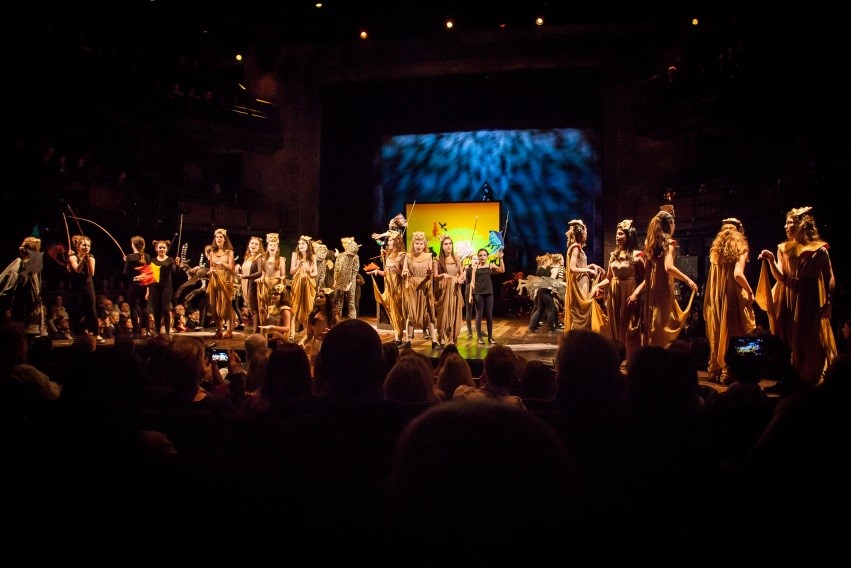 Performed on a traverse stage involving over 130 pupils. 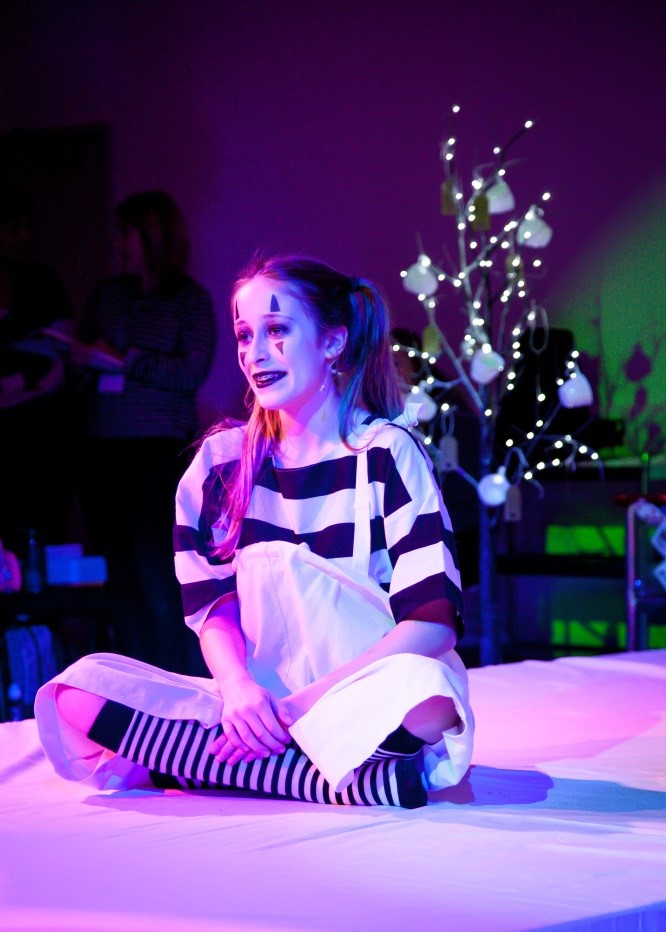 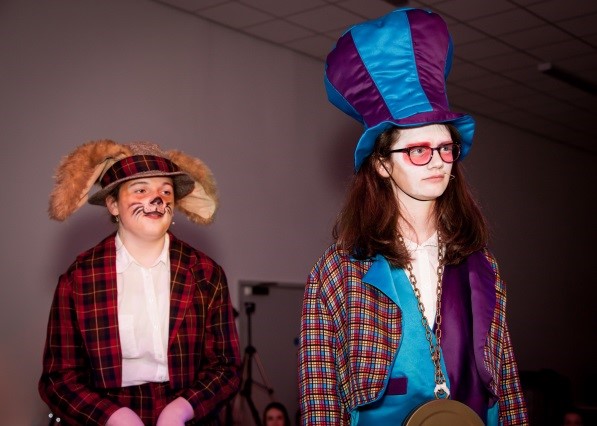 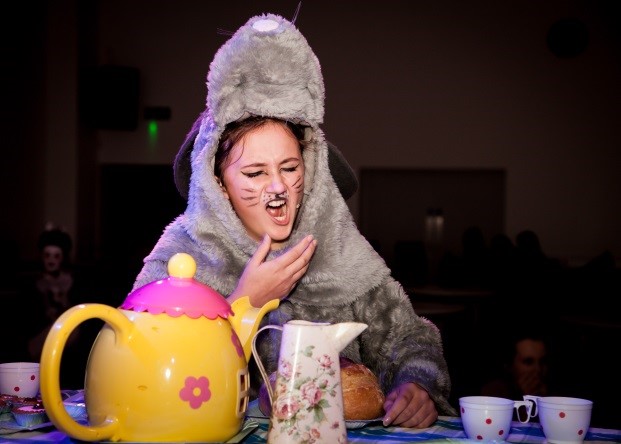 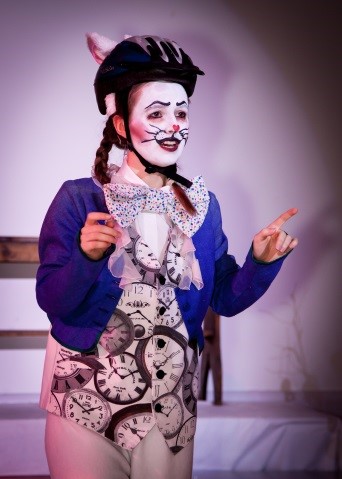 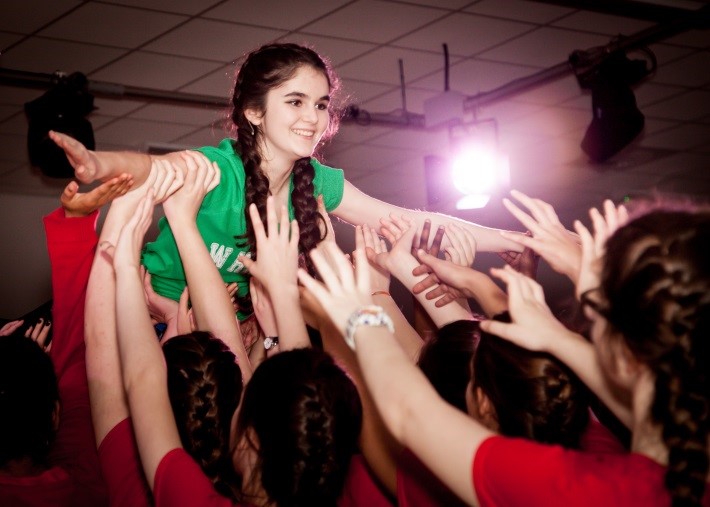 Performed in the round involving over 80 pupils. 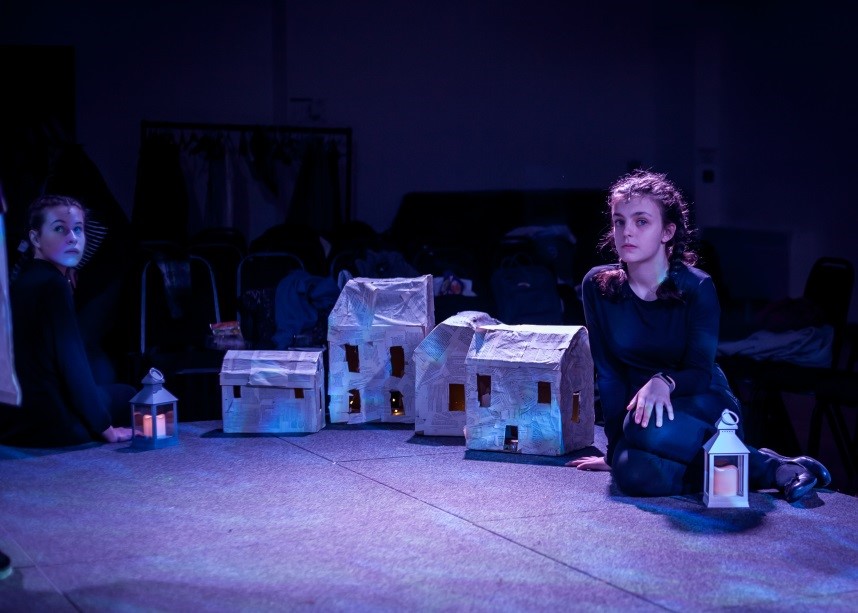 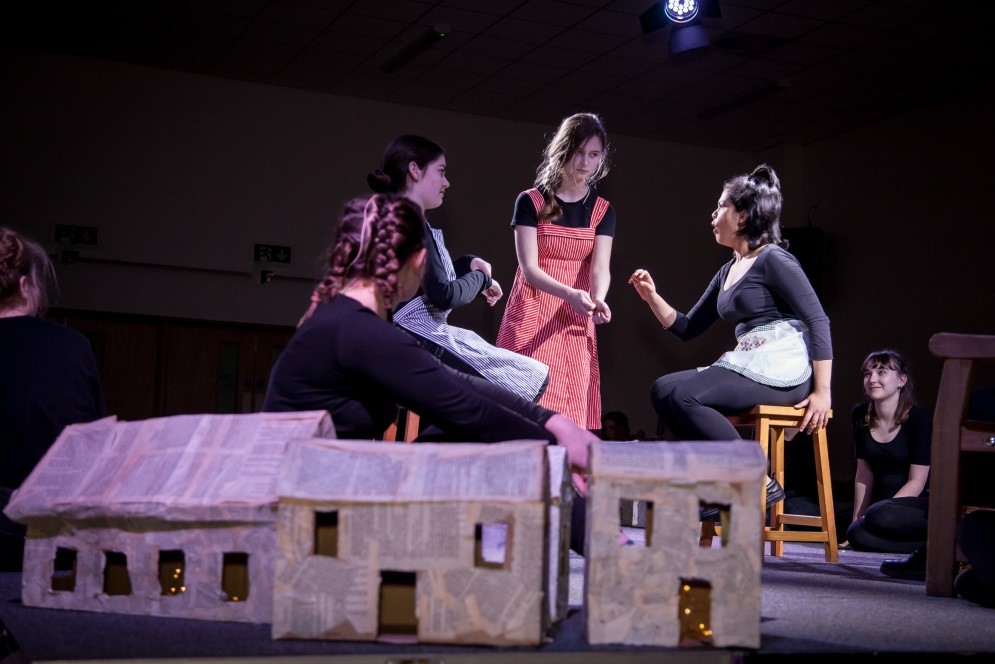 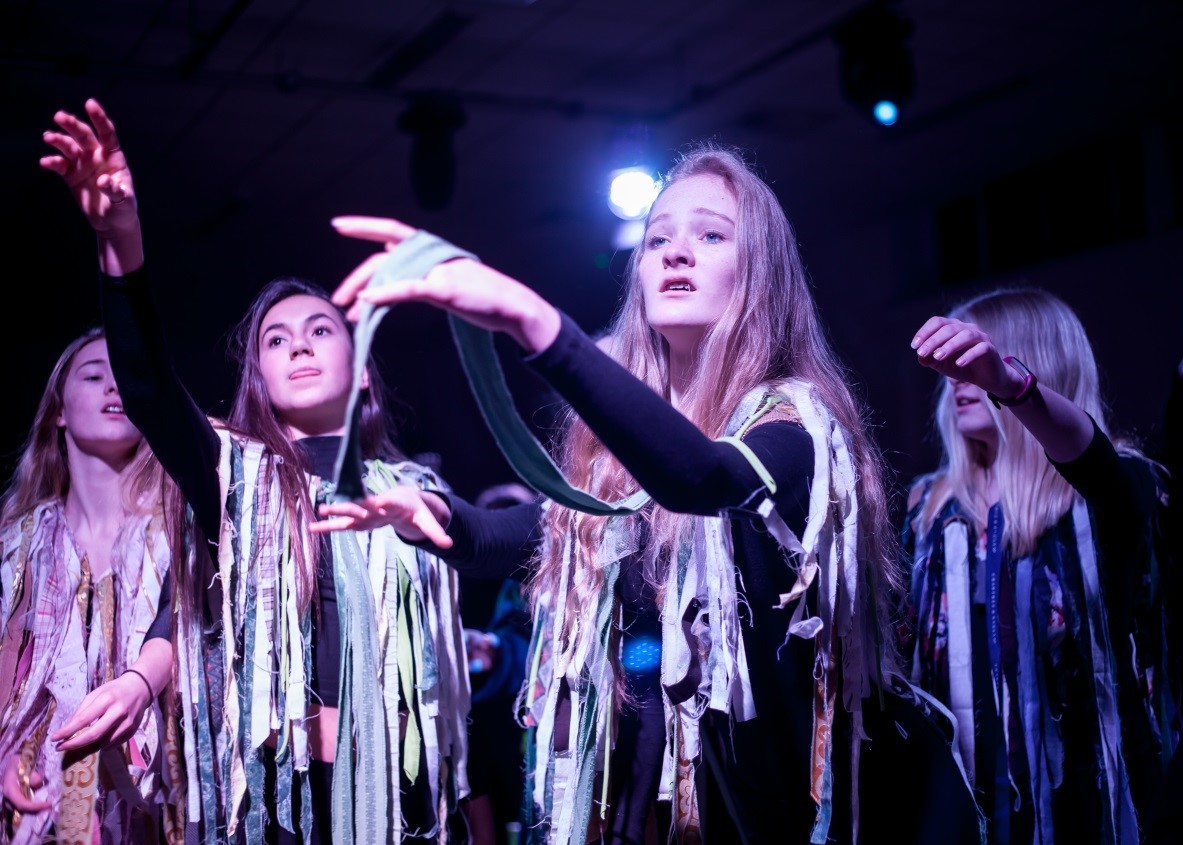 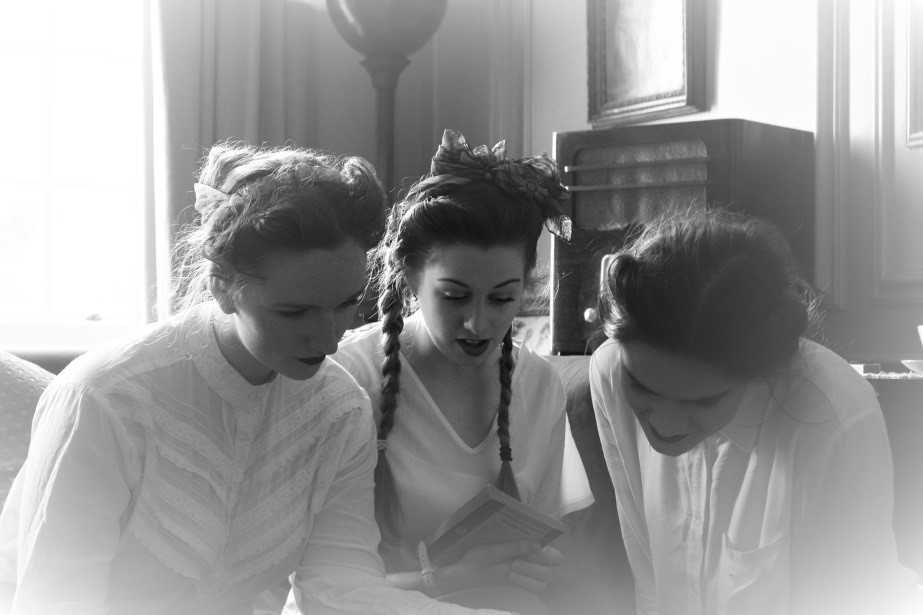 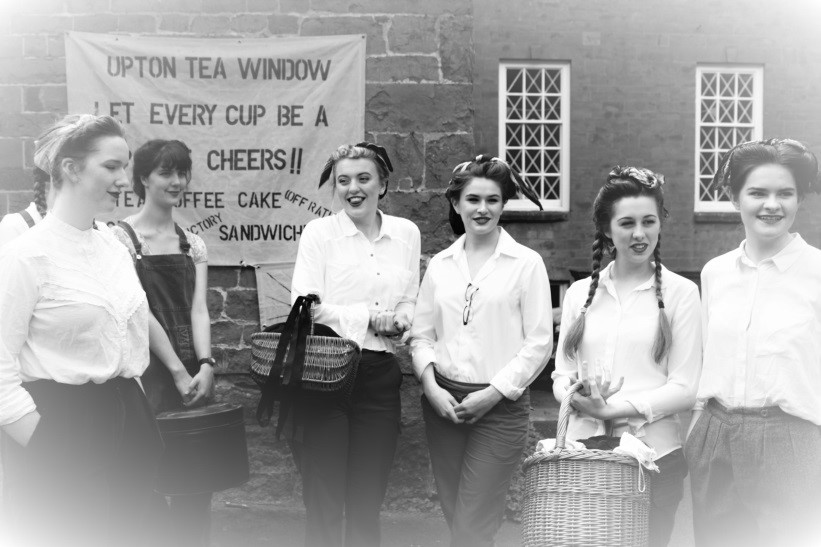 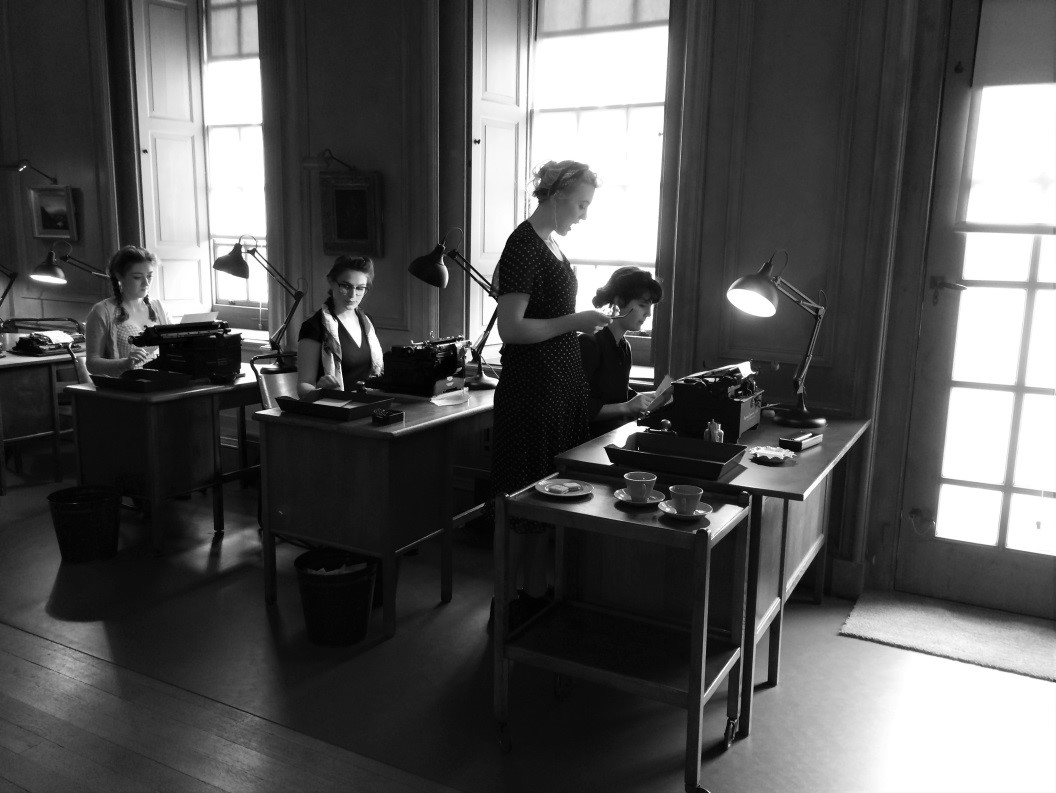 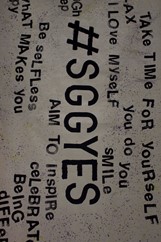 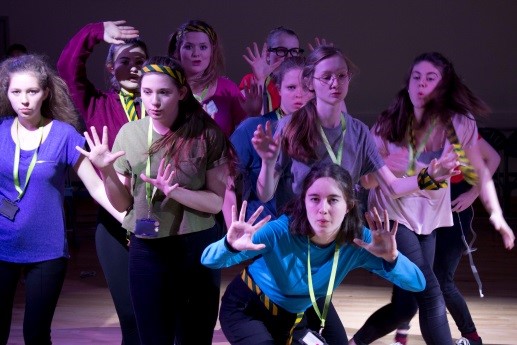 thinking, resilience and being good role models for each other. During lunchtimes, everyone was offered a range of activities from Yoga, mindful colouring, good old fashioned puzzles, a  ’walk and talk’, a stress busting workshop run by the sixth form  Learning  Committee (with free food!), to name a few.  Year 12 and 13 worked intensively with Paula Penman (actor and facilitator) to explore the issues they were presented with from poetry created by Year 9.  The play they devised together focused on one girl wanting to grow up and finding out that adult life is full of little problems 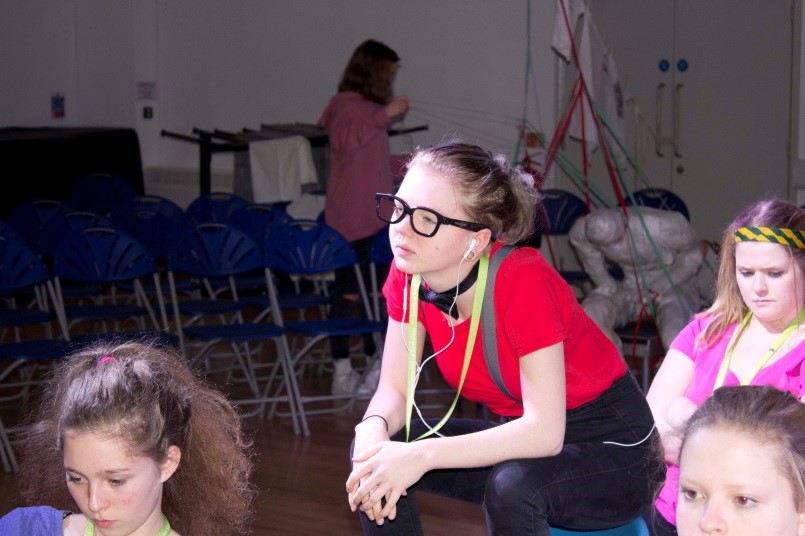 too… so don’t wish it away.  It suggested to the audience that every stage of life has its ups and its downs - it’s not a teenage thing, it’s a life thing.  Problems are normal, but as soon as you recognise there’s a solution, you can work it out.  The play was performed surrounded by art work created by Year 9 art students with provocative slogans and images requiring us to reflect and question what is important. The breakout discussions after the performance provided us with lots to consider in terms of how we respond to difficulties and where 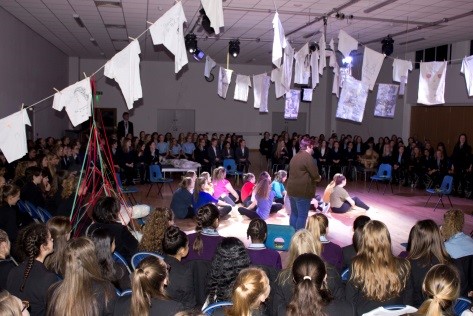 we might seek guidance. During the week we supported the charity ‘Young Minds Matter’ by selling bracelets and handing out information – over £200 was raised.

It is important for students studying GCSE Drama or A-level Theatre Studies to experience as much live theatre as possible. The theatre trips are intended to act as inspiration for practical work, to widen students’ experience of theatre and to provide material to analyse in the summer exams. It is not essential that drama students attend every theatre trip, as there are many opportunities throughout the course. It is, however, essential that they take an active interest in visiting the theatre as regularly as possible. In the last five years we have visited Warwick Arts Centre, The Oxford Playhouse, The Birmingham Rep, The Bristol Old Vic, Malvern Festival Theatre, and various London theatres including the Fortune, the Lyric Hammersmith, the Novello and the National – as well as our local Royal Shakespeare Theatre, of course.  Productions seen in the last five years have included the following:

The Flying Lovers of Vitebsk performed by Kneehigh Theatre Company

Things I Know to be True, performed by Frantic Assembly

946: The Amazing Story of Adolphus Tips Adapted by Michael Morpurgo and Emma Rice

The Angry Brigade by James Graham, performed by Paine's Plough

Charlie and the Chocolate Factory, adapted from Roald Dahl’s novel

The Believers by Bryony Lavery, performed by Frantic Assembly