Making a difference to people with dementia

Esmerelda Elfwood, an ambitious and avid knitter from Year 9, recently received a glowing review for her incredibly impressive Twiddle Muff creations, hand warmers that are also a source of visual, tactile and sensory stimulation.

In this week’s blog, Esme shares her story as we proudly showcase her outstanding efforts and commend her dedication and commitment to making a difference to the lives of people living with dementia. 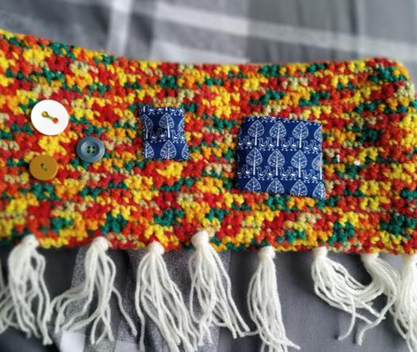 When I was tasked with fulfilling the volunteering criteria for my Duke of Edinburgh (DofE) Bronze Award, I instantly knew what I wanted to do. My Grandmother passed away last year and due to COVID-19 restrictions, we weren’t able to say goodbye in person. Using technology to virtually communicate proved impossible due to her dementia. I knew I wanted to help people who suffered from memory problems and improve their day-to-day lives where I could. Unfortunately, the restrictions continued and access into care homes was strictly regulated, but this did not stop me!

I had only vaguely heard about something called a Twiddle Muff before, but I knew that one of the things that helped to soothe my Gran was to distract her mind by fiddling with things around the home. After a bit of research, I set about designing my very own Twiddle Muff and began by considering the different elements I wanted to include. My Gran always liked to be reminded of the past, she still knew all the lyrics to the songs of Elvis (as she ably demonstrated on her 80th birthday) and I knew that remembering the good old days was comforting for other residents as well. So, I tried to capture memories and include materials that would remind them of when they were younger.

I also knew I needed to include safety features to make the items secure enough to be used in a care home setting, so I took what my Mum had taught me about crocheting during the first lockdown to finish my first prototype. Shortly after, I contacted a local care home to see if they might be willing to hand them out and they were thrilled with the idea and immediately said yes.

Every week I would crochet two large rectangles and the following week, I would sew them together and add the other elements and materials such as bells, buttons, fringes and crinkly bits (all secured under double stitched pieces of fabric to make them safe). With each of my designs, I tried to incorporate vibrant colours as from the research I had carried out in the initial design stages, I discovered that dementia patients respond really well to bright colours and objects. Once I had completed two Twiddle Muffs, I sent them to the care home and after a period of quarantine, they were ready to be handed out and enjoyed by the residents.

I’m really glad that I was able to contribute to the home because if I had completed my volunteering by going into the home, I would’ve only been able to visit for a few hours.  With my creations,  I can still make a difference to their lives all the time. My assessor at the care home even said they had improved the quality of life for the residents and they were so happy to have been part of this journey.

I think, if my Gran were still alive, she would have been very proud of what I managed to achieve.

“I was very impressed with the time and thought Esmerelda put into researching and implementing her project. She sent me a prototype 'muff’ with a list of safety features that she had designed, for example, triple sewn buttons, safety stitches in the fringe and hemmed edges so fingers/rings don't get snagged. I was blown away by the depth and maturity of her consideration for the residents and the time and thought Esmeralda had put into each and every stage.

The various bells and buttons and crinkly bits are very soothing for people with memory loss and they sparked memories of childhood that made residents feel happy and secure. She has worked very hard making them and she never missed a delivery. The colours, designs and quality were always outstanding and it is obvious that she donated a lot of time to make the items. We think she is a total star!”.

Congratulations to Esmerelda on her thoughtful, creative and skilful creations. She has acted as a role model for the entire SGGS community and we are very proud of her achievements.