A student review of the SGGS Art Trip to Venice...

We all arrived at school for the coach ride to the airport. It all passed without any real problems, which is a novelty for school trips, and we were all excited to be on our way to Venice.  After the usual laughing at passport photos whilst waiting for border control, we were on the coach on the other side, and in no time at all watching the silhouette of Venice getting closer as we drove across the bridge connecting the city to the mainland.

The initial walk through Venice was breathtaking, although dragging suitcases over the first five bridges grew more testing and we began to tire of the beautiful blue-green canals. A good few bridges later, Miss Hillier finally admitted that maybe a paper map wasn’t working, and we stopped in a memorable square with a giant Lego Donald Duck staring down at us from a window.  We set off again with renewed energy and eventually made it to the restaurant, where we all devoured our first pizza and pasta dishes of the trip, before going off to explore the famous Rialto Bridge.

After a good night's sleep, a delicious breakfast and a good coat of sun cream we all set off to St. Mark’s Square. Upon arrival Mr Flaherty gave his best shot at being a tour guide and explained a bit about St. Mark’s square. It is the principle public square of Venice, making it a popular spot for Venetians and visitors alike. We wandered around the square taking in all of the stunning architecture. We got panoramic views of Venice from the Basilica’s bell tower. After a quick sketch of some gondolas we entered St. Mark’s Basilica. Everyone was in awe of the detailed mosaics adorning the walls and the rich history encompassed by the church.

After finding more pizza for lunch, and then ice cream to follow we walked to the Arsenale to see the 58th Biennale Art Exhibition which had the title: ‘May You Live In Interesting Times’ (which could be interpreted in many ways). We saw a vast array of thought provoking artwork (video, audio, installations, digital and many other forms of art) from artists all over the globe.

After this amazing visit, we were ready to go back to the hotel for a little rest before dinner, and subsequently discovered google maps is actually a bit better than Miss Hillier’s map reading skills, who could have guessed?! We arrived back at Hotel Canada and had some time to rest and relax before we set out to the restaurant- Ae Oche- for dinner. After a rather delicious dinner the group broke off into smaller groups and explored the city at night. We wandered around constantly being impressed by the glittering canals and gently lit architecture. St. Mark's Square at night was a spectacle, with 4/5 piece orchestras dotted around playing the classics and also some more modern pieces (like Beauty and the Beast!).

A group of us had an early start, eager to get some photos of Venice minus the swarms of tourists. A quick nap later and after some breakfast, we caught a water bus to the Murano Islands and watched some incredible glass blowing demonstrations (enhanced by dramatic music playing in the back). Before lunch, we split off in to smaller groups again to explore the island, examining the brightly coloured Murano Glass necklaces, chandeliers, ornaments and other creations. We contemplated bringing home a lump of Murano Glass that, to one students delight, greatly resembled the Philosopher's stone, however all too soon remembered the Ryanair luggage weight allowance! After a relaxing lunch, most people were leaving the island holding their bags with a little more care than previously due to various purchases on the island.

We hopped on board a water bus and headed for the Giardini (Biennale part 2). Again, we were inspired and challenged by some very intriguing bodies of work. There was a colossal amount, so we didn’t get to see everything. However, the others had some very interesting comments about some of the work we had not seen.

After catching another water bus back to the Rialto Bridge, some rest and relaxation time at the hotel was required before we headed for the restaurant. To our delight it poured down with rain the moment we stepped out of the hotel doors...we all got drenched!

It had been a long day for others so, after a slow walk back from the restaurant, we were glad to come back to the air conditioned rooms of the hotel.

After a lovely morning walk through Venice and a visit to a rooftop terrace, we attempted a gondola trip and were initially turned away because of another very large tourist group. Thanks to Miss Hillier and Mr Flaherty refusing to take no for an answer we had a lovely tour of Venice on the water. These trips were a varied experience between various groups- some of the gondoliers were flexing arm muscles whilst others almost managed to fall off the boat.

After the excitement of all this, we headed to the Academia Gallery. They had an impressive collection of classic art and Georg Baselitz’s (Neo-expressionist) work. We saw the ACTUAL VITRUVIAN MAN by Leonardo Da Vinci, which brought a tear to the eye of the more invested student. This was followed by a collection of around 40 other Da Vinci sketches which again was a lot to process for some.

The Peggy Guggenheim was next, an excitement for us as there were many notable pieces and names (Magritte, Ernst, Picasso to name a few) present from the past century. We went to a lovely talk about Jackson Pollock and saw the first drips painting “Alchemy” and some very early works that showed clear inspiration from other artists such as Picasso, before he developed his characteristic style. Seeing pieces like this was a shock, and unexpected insight into the development of some of the most established artists in modern and contemporary art, which made it a unique visit. After a nice relaxing time snacking in the courtyard, we set out straight to the restaurant, to fuel us for the last evening activity, which was a Vivaldi concert (a feast for our ears!). We went for one last trip to St. Mark’s square at night and listened to the small orchestras whilst winding (slightly aimlessly) around the square, taking in the atmosphere.

After saying our farewells to the hotel and the staff we started making our way back to the coach station. On the way we stopped off to explore the Jewish Ghetto and found a little park as well. After this wander we had lemon soda and iced coffee to refresh ourselves for the long travel journey ahead! The walk to the coach station was much shorter than anticipated.

The flight home gave us all time to reflect on how spectacular the trip was! We are all extremely grateful for the experience and Venice will continue to inspire our work and lives in the years to come.

On behalf of the group we would like to send our appreciation to Mr Flaherty and Miss Hillier!

Katie Philips and Annabelle Greenway  - who won’t be eating ANY pasta or pizza for at least a year! 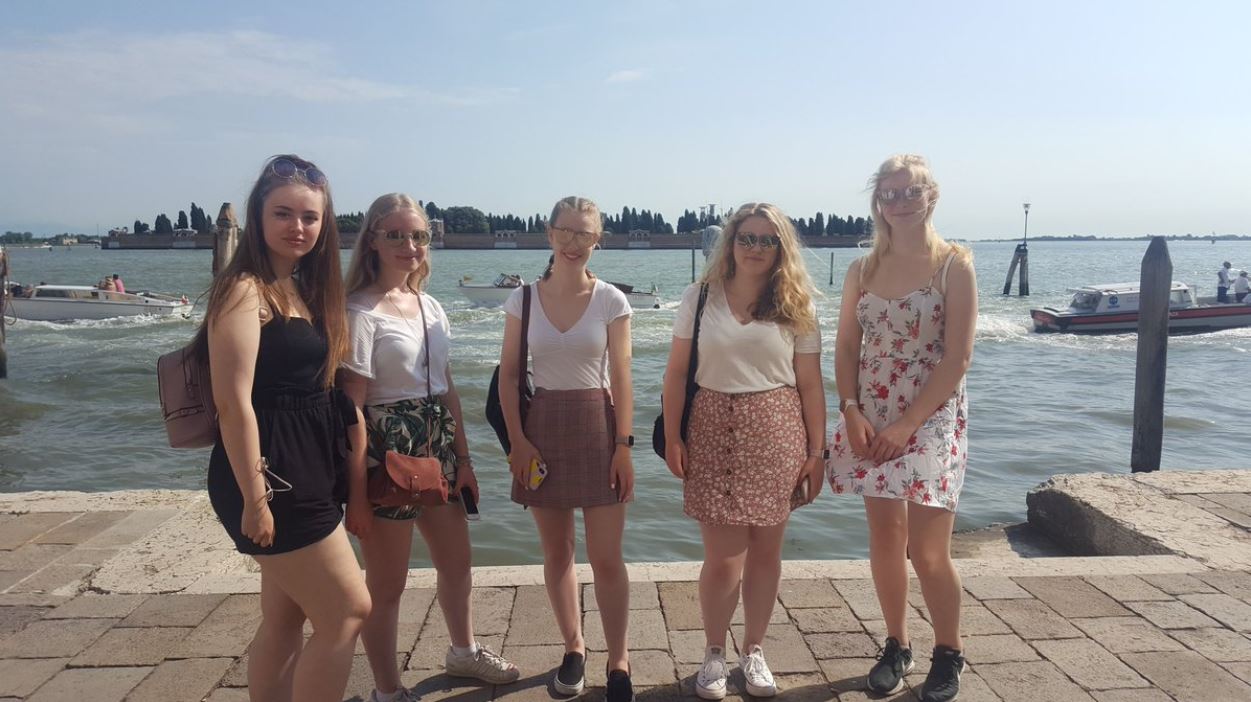 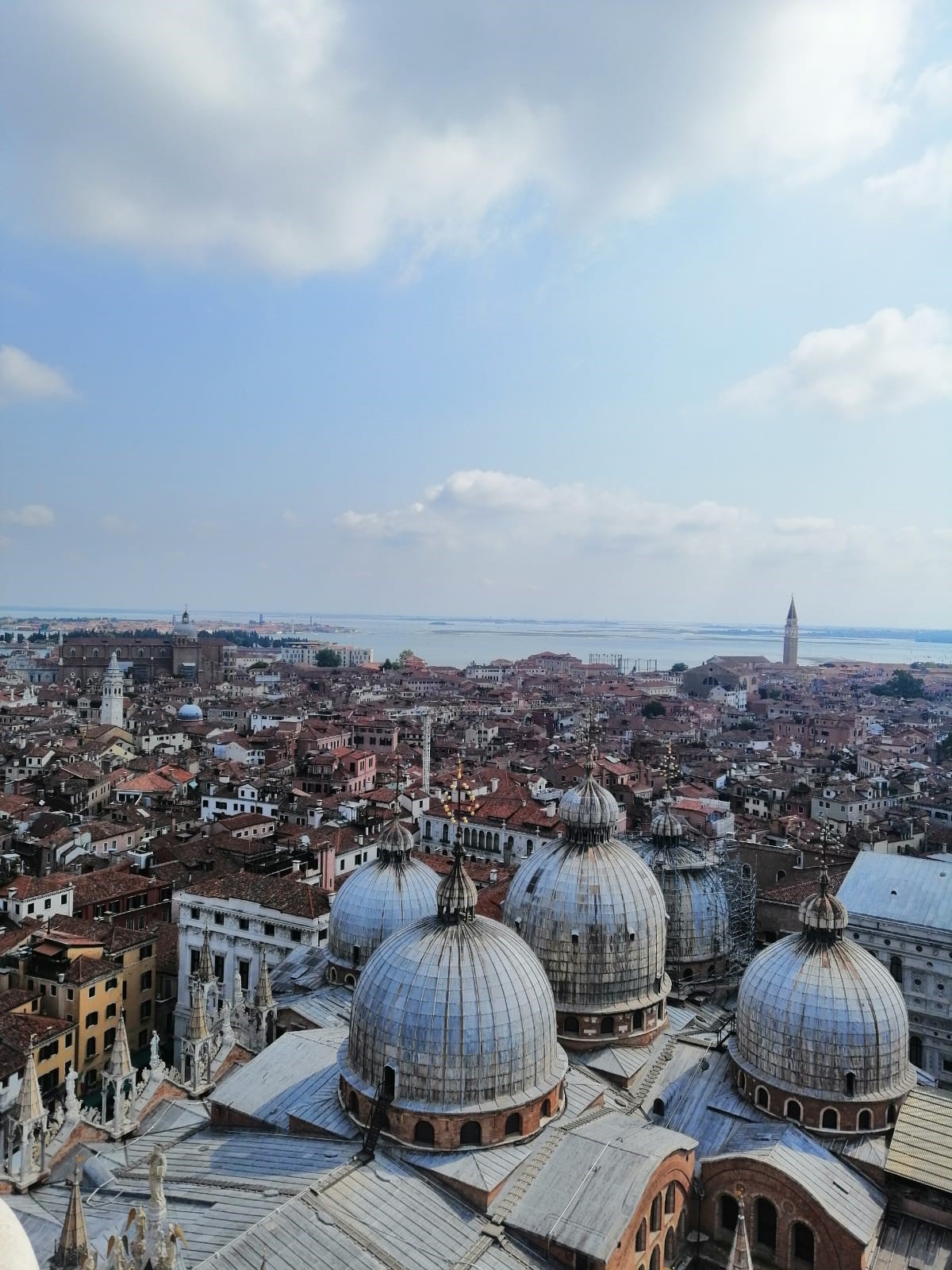 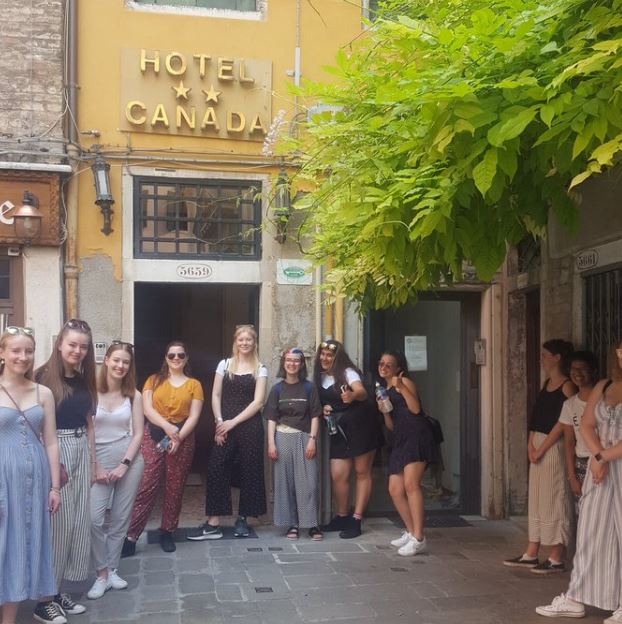 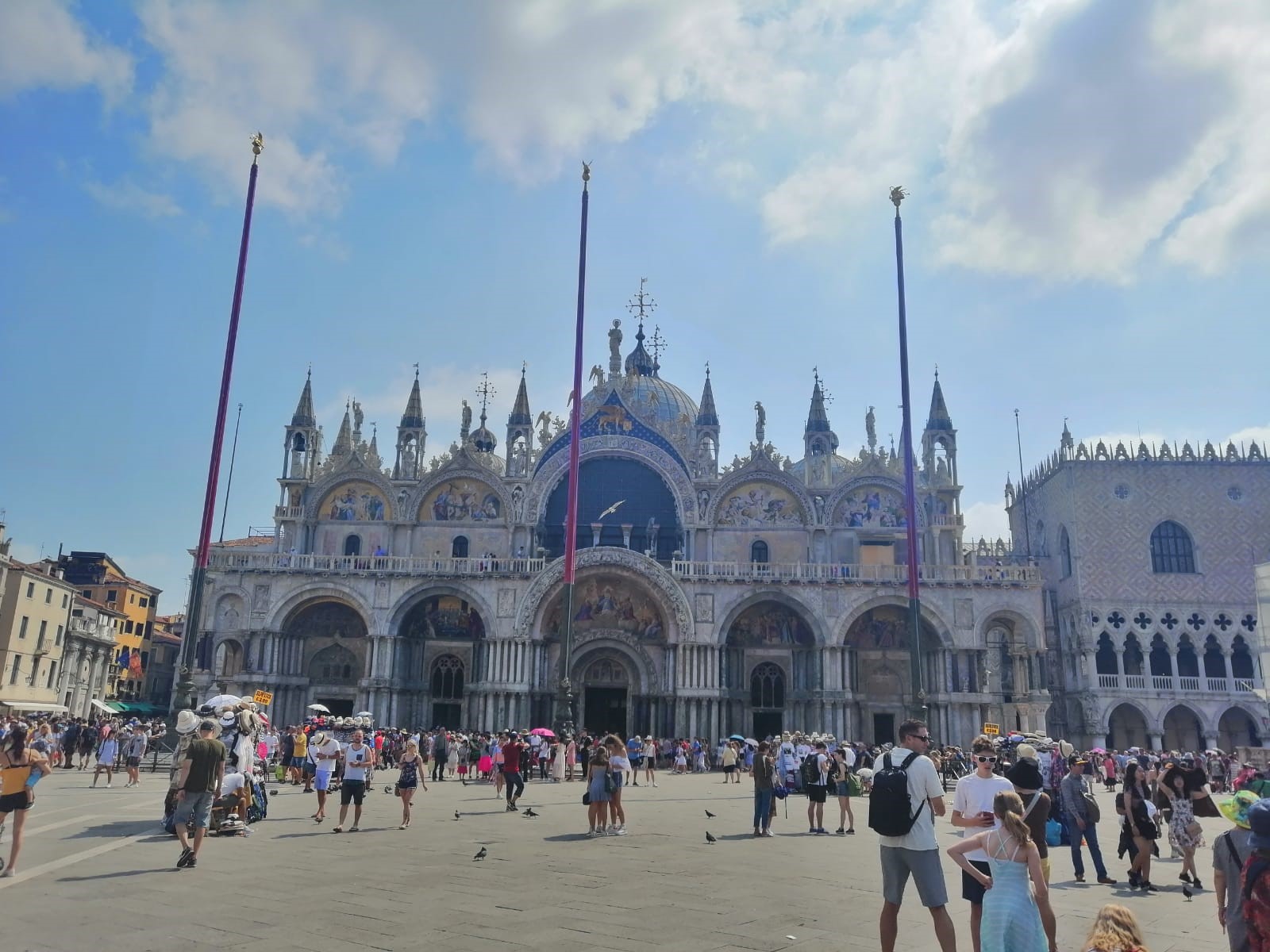 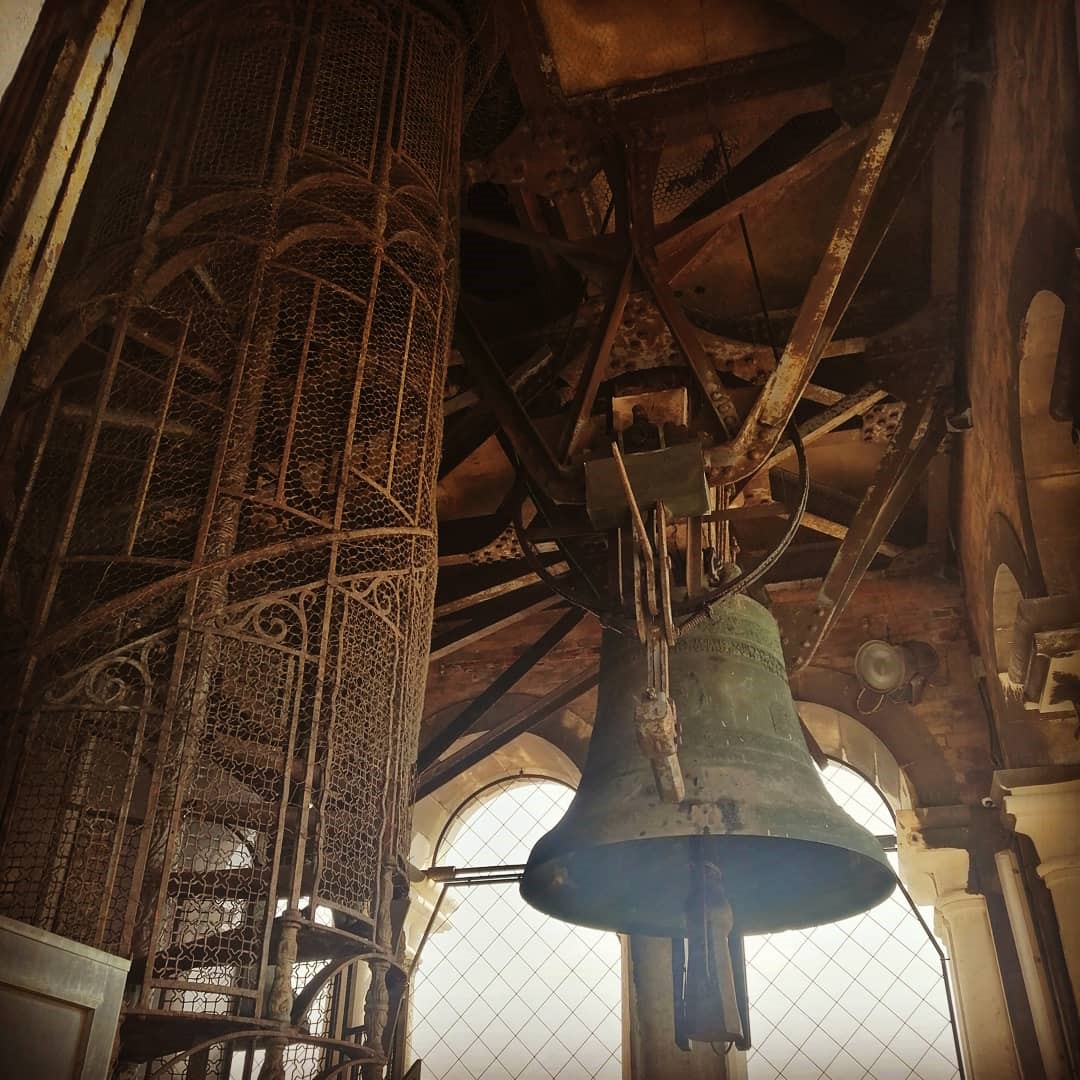