At the beginning of this project, we took part in a two hour workshop with an actor from the RSC called Nadia Albina. She helped us to explore the play, especially the themes presented, and the way Shakespeare and Shakespearian actors used language.  She also introduced us to a few games that helped us to engage with one another and work together as an ensemble.  After the workshop, we decided that instead of selecting the cast, we wanted everybody to have an equal opportunity to play a major, well-known character.  So we drew the names of characters out of a hat, to ensure that everybody had a chance at playing a role with a big speaking part.  Once we had assigned roles, we started to experiment with ideas for the forest as a lot of the play takes place in this setting.  We wanted the forest to be magical and mysterious, with a modern twist.  We grabbed the first things next to us – our mobile phones and we used the torches on the phones to make the scene look magical and to represent the fairies that lived in the forest.  However, the scene seemed unfinished and not as mystical as we had hoped, so we had the idea to use ringtones to mess with the people in the forest.  This made the fairies seem cheeky and mischievous, as well as adding a touch of modern magic to the scene.  This gave us the idea to use music throughout the whole play, but we were determined to have live music, rather than recorded soundtracks.  Lily Robson, Issy Scanlon and Grace Duff took it upon themselves to write and perform the music for our performance.  The initial concept for the underscore was to use instrumental music in a Renaissance style to contrast with the use of modern technology on stage.  We also used Shakespeare’s words to write a fairy lullaby and a comedy song for Bottom.  This then allowed us to connect the music with the play and also added a unique element to our performance.  We also went through the script and decided where we could add mickey-mousing, a technique where the music mimics what is happening in the action.  For example, the music would slide down as someone on stage fell over.  This adds to the atmosphere and helps to enhance the themes being presented on stage.

For costume, we chose to use neutral and toned-down colours, following Kanye West Yeezy Season 2 clothing collection, a line that used the colours and style we were aiming for.  We used layers to create texture and depth in our piece.  This also allowed every actor to multirole, to enforce the ensemble style of the piece.  The three main characters, Oberon, Titania, and Puck, had capes with ribbons of coloured fabric to further cement the ensemble style, as it allowed them to join with other actors as their train, and for them to become a part of the ensemble at necessary points.  Every member of our company had their hair in two French plaits, to emphasize the unity and uniformity within the actors and within the piece.  We also all used mobile phones to show the control the fairy world had over the human world in a subtle way.  We used the phones to entice characters into the fairy world by using the lights on our phones with coloured gels over them, and ringtones.  This also modernised the script, and made it more accessible for the modern audience.  However, we made the decision to keep all of the Shakespearian language in an attempt to mix the two styles of production and to make it more interesting for the audience.  This also emphasised the detachment that the fairy world felt from the human world, while also highlighting their involvement in the lives of the court and the lovers.

Our rehearsal process was a lot of fun!  From casting roles to final dress rehearsals, we had a very busy schedule.  It took a lot of commitment but we were so proud of how it turned out.  We started by drawing ideas from previous work we had done that was inspired by A Midsummer Nights Dream, and from that process we came up with the motif of using our phones throughout, and incorporating modern day technology into the Shakespearean play. We cast the roles randomly to give everybody a fair and equal chance, and once the roles were cast we began working through each unit (small scene), formulating ideas and blocking out the play.  Once we had blocked each scene we began going through it again and making sure the scenes flowed well into each other and developing our ideas further.
As we began to reach the end of our rehearsal period we started wearing our costumes to enhance our characterisation and really began to perform properly.  We had several dress rehearsals during lessons and lunchtimes, and we performed to our friends and some parents during the final dress rehearsal before the show.
We all worked together to create the image and final performance we wanted, and we were very happy with how it turned out!  Overall it was an incredible experience and we are so grateful for having the opportunity to perform in The Other Place!

After running through our final performance, doing our final tweaks at school, putting on our make up and doing our hair, we walked through Stratford-upon -Avon to the Clore Learning Centre.  We then attended a vocal and physical warm up, given by the RSC professional Anna.  She highlighted the importance of warming up before a performance and gave us some vocal training tips which we were enormously grateful for.  We were then escorted to the The Other Place where we saw a snippet of the Stratford College performance al fresco.  Then we were led inside to watch Kingsleys interpretation of A Midsummer Nights  Dream.  They focused on the mechanicals play and it was a very interesting and amusing interpretation.  After we were shown to our dressing room, we got changed into our costumes and topped up our make up and touched up our hair.  Our costumes were of a nude colour scheme with sparkly highlight.  Our technical rehearsal flowed well with few hiccups as we got used to the new space.  It was useful to see the new lighting that we were using and this brought the performance to life.

Our final performance was the best yet!  We received so many positive comments from the audience and we were all buzzing from how well it went.  We all felt very privileged to perform on the RSC stage.

Our thanks go to everyone who was involved in helping this project come to life, and for giving us such an incredible opportunity. 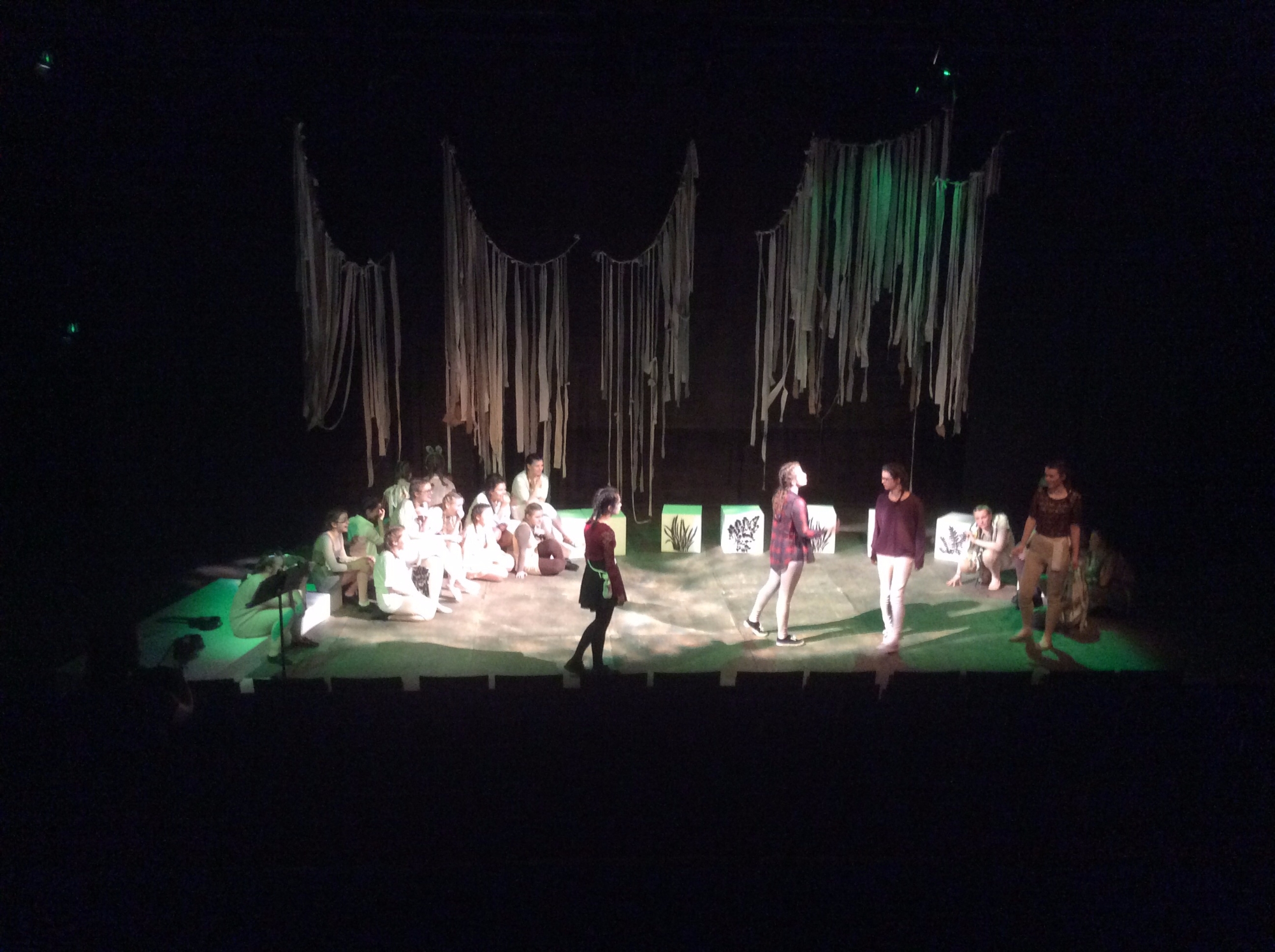 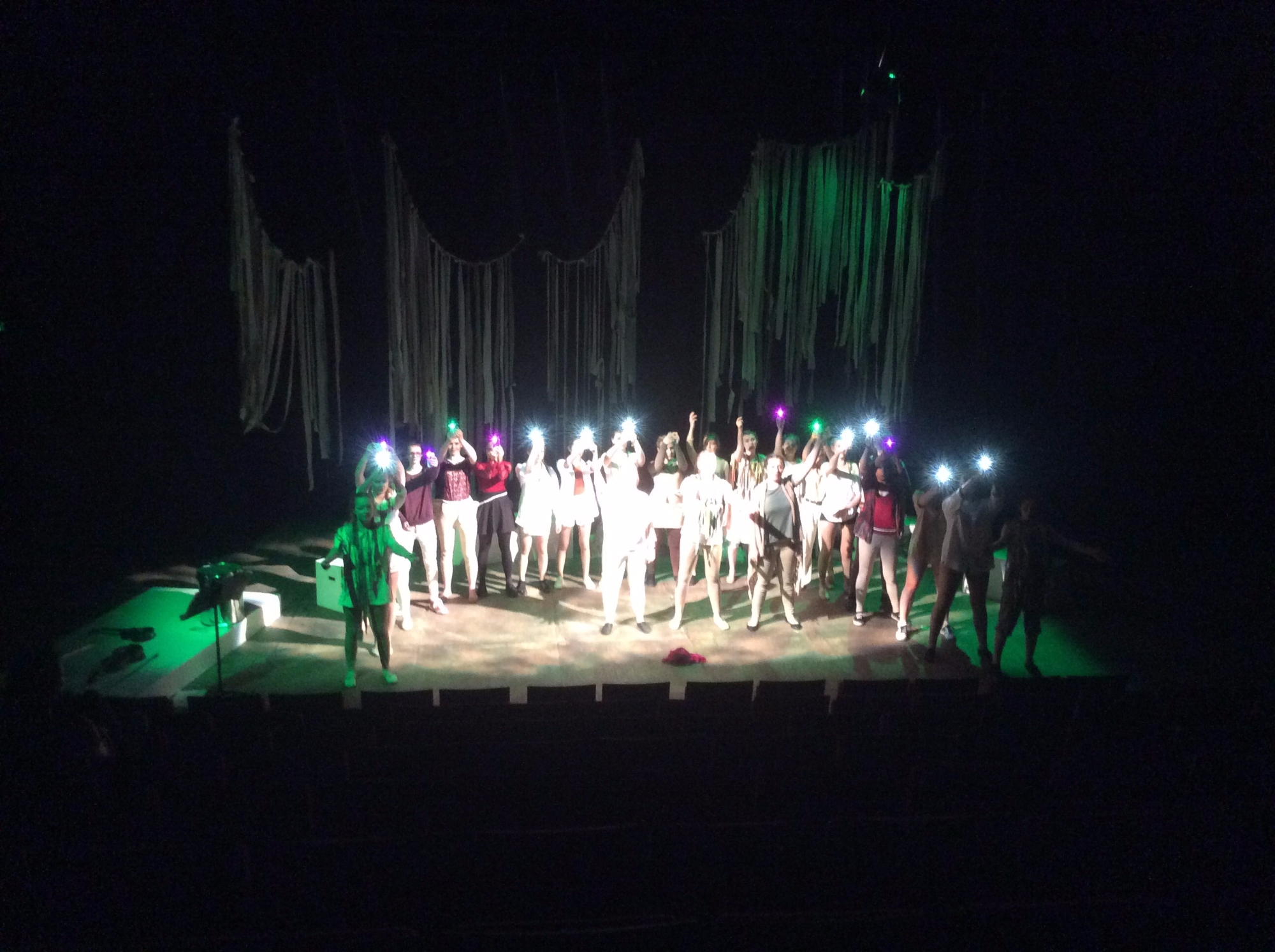