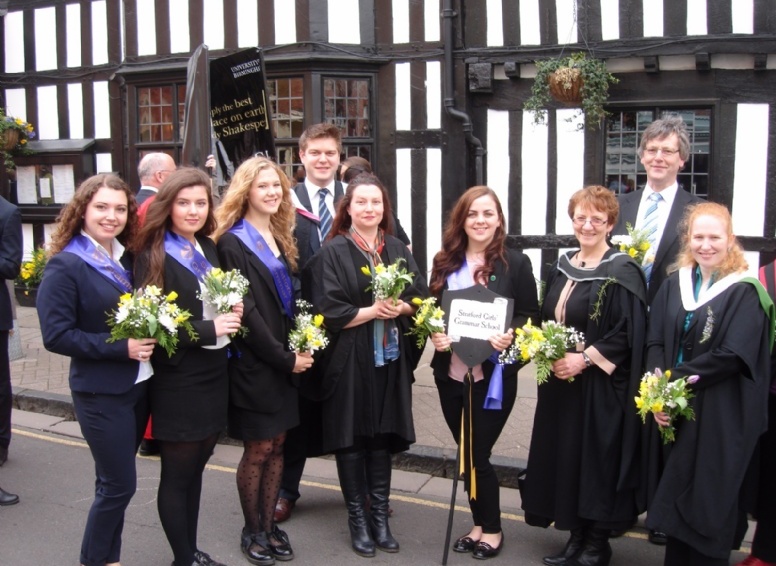 The Shakespeare Birthday Parade this year included our Year 7 Drama Club girls performing an extract from The Tempest.  Read on to find out more about this wonderful celebratory day...

This year's Birthday Celebrations included street theatre before and after the Parade, and our Year 7 Drama Club worked on an extract from The Tempest to perform in the centre of Stratford before the parade. Their performance was very impressive - despite competition from a nearby marching band - and they were excellent ambassadors for the school, demonstrating exemplary behaviour throughout the morning. Here are their thoughts on the process:

“Rehearsals were challenging as after spending so much time playing games, we didn’t have long to rehearse. Also, we found Shakespeare’s language difficult to understand. It was so much fun creating the characters though, such as Caliban.” Charlotte Braso, Holly Hughes, Charlotte Prince, Lauren Abba

“It was really great getting a feel for the atmosphere before we performed. We handed out flags to the public, who were really getting into the spirit of Shakespeare’s Birthday. It was slightly daunting handing out flags to complete strangers but once we got into the swing of it, it was really enjoyable. Also, by the end of it, we were offering our flags in unison – this really impressed the crowd!

Our performance was very exciting. We worked as an ensemble to create the island and worked in small groups to represent each character. Although it was a bit daunting performing to the public, we pulled together and made it through.

After the performance, we joined the end of the parade. It was good fun waving to the public – even though we were doing it for a long time. The sun was very appropriate to the mood of the day, and seeing Shakespeare’s grave was fascinating. We thoroughly enjoyed the experience.”

“We thoroughly enjoyed the experience because it was a chance to expand our horizons and meet new people. The most enjoyable thing was putting a smile on the audience’s faces. It was great fun and we would love to do something like it again.”

We were once again delighted to be asked by the organisers of the Celebrations to provide hosts and standard bearers to accompany the various dignitaries and groups taking part in the Parade - and we wore our purple Stratford Girls' Grammar School banners with great pride as we did so! A great morning was had by all!