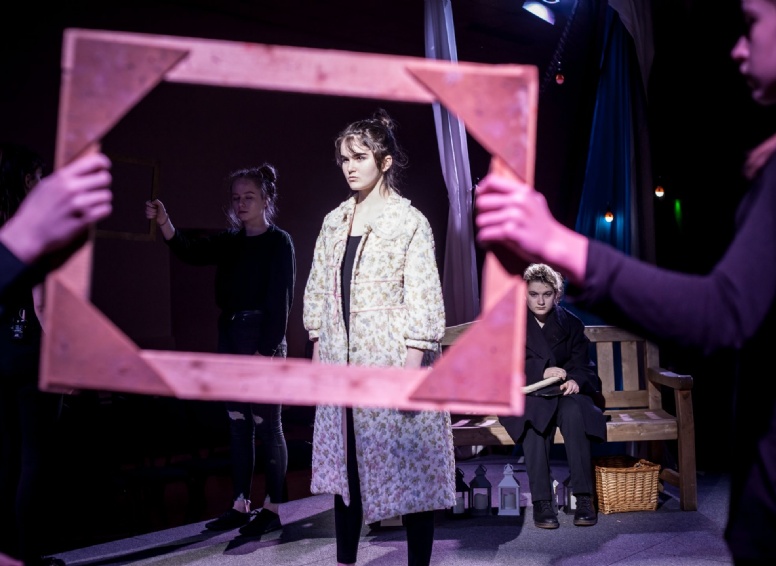 A selection of reviews of our production of Under Mik Wood, a poem by Dylan Thomas that was converted into a play by our Drama department...

Under Milkwood is a poem written by Dylan Thomas in 1953 that was later converted into a play by our school.  On Tuesday 6th of February, Years 7 and 8 were the first to watch a full performance of under Milk Wood and they left the school hall baffled!  The whole Hall fell in love with the Reverend Jenkins and all wondered in awe at the beautiful scenery - you could almost say that the houses were made from words.  There were many laughs as well as sad moments when you actually really felt for the characters.  Throughout the whole play seven narrators guided the audience through the production, accentuating the whole experience.  The play was beautifully crafted and the costumes  really bought the characters to life. The actors put on flawless Welsh accents that they managed to keep up all the way through!  Under Milk Wood was truly brought to life by this performance and watching this play was an unmissable experience.  -  Asyl Ashraf

When watching Under Milk Wood performed by Stratford Girls’ Grammar School, I was astounded right from the start, by the setup of the stage and cast.  As the performance was centered in the middle of the audience, everyone sat in wonder, as the narrators stepped onto the stage with torchlights in hand.  Each scene was very well rehearsed with all the actors excited, but staying completely in character throughout the whole performance, which gave the play a really professional look and feel.  The performance music band were extraordinary, from every scene change to each exciting moment, they helped the audience to connect with the actors.  Every piece the band played was well performed which really enhanced the whole atmosphere of the play. From the comical scenes, to emotional ones, all of the actors delivered their lines with confidence and powerful stage presence which conveyed the changing moods in the differing scenes.  As a part of the audience, it was clear that lots and lots of effort had gone into every single area of the production, making it such a fantastic and enjoyable performance to watch.  -  Emma Bowden-Williams

On Tuesday, I watched the school play, Under Milk Wood. The narrators helped guide you through a collection of dreams which then switched to reality.  From the impressive staging to the simple but effective costumes, and the Welsh accents that were kept up throughout, I really liked the way visual theatre was used to make the play more engaging and exciting.  -  Sarah Chessell

On Tuesday 6 February, the annual SGGS extravaganza was shown to the pupils of Years 7 and 8. Pupils from all years have been dedicated to rehearsals to produce this fantastic production – Under Milk Wood, by Dylan Thomas. The setting was a fishing village in rural Wales, and we were treated to amazing costumes and scenery.  I particularly enjoyed seeing Mrs. Ogmore Pritchard talking to her two husbands; it was extremely funny!  The series of narrators guided us through as the actors portrayed authentic Welsh accents, for which they should be really proud. It was exciting to watch – another SGGS success!  -  Hannah MacGregor

I was delighted to be able to represent The Shakespeare Hospice at your school’s recent production of Under Milk Wood. What an absolute privilege it was to watch such an outstanding performance, showcasing immense talent and commitment amongst the girls.  Thank you very much for the opportunity to spend a thoroughly enjoyable evening, which I shared with my daughter who, as you know, is a Drama student and aspiring drama teacher. She was blown away by the production and it  has certainly given her something to aspire to!  -  Helen Helen Smith, Macmillan Youth and Community Co-ordinator, The Shakespeare Hospice

The SGGS representation of the tale Under Milk Wood was outstanding. The play is set in a small village in Wales, therefore the actresses put on amazing Welsh accents. Everybody involved: the musicians; the actresses and everyone behind the scenes looked genuinely happy and vibrant. The live music was atmospheric and I felt it added a great deal to the play; the singing on and off stage was incredible.  The backdrop was simple, so that it didn't distract from what was going on on stage, but it was very effective.  I really enjoyed it!  -  Charly Marshall