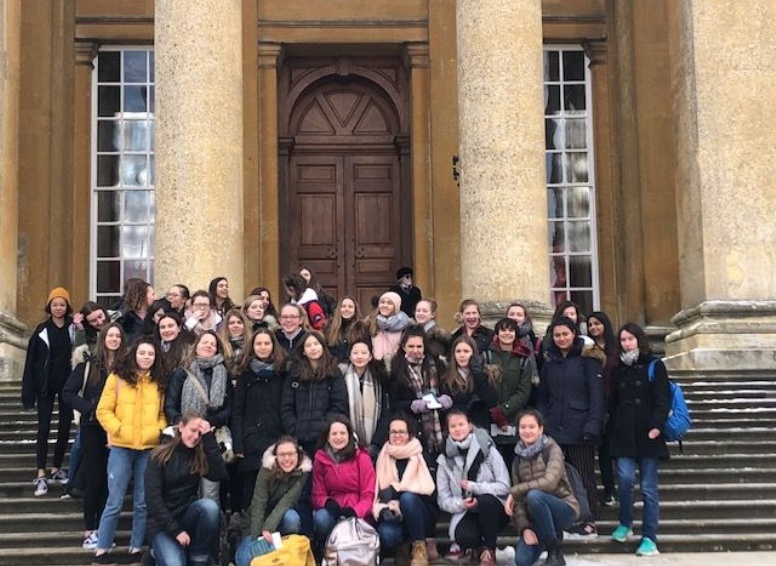 Year 10 student Charlotte Curd tells us about her experience, being part of the brilliant SGGS German Exchange Programme...

I was both nervous and excited to find out I had a place on the German exchange, as it was the first exchange I had ever done... but it certainly won't be the last!  Although I was a bit apprehensive about signing up, it has been one of the most fun and rewarding trips I have ever had the chance to be a part of.

Our exchange was with Maria Ward Gymnasium (Gymnasium is the word for grammar school in German) which is in Munich, South East Germany.  I remember collecting the sheet of information about who my partner was and what similarities we shared. I will admit I was still a little nervous just because I really wanted us to get on. In truth, I had nothing to worry about!  Mrs Stringer and Miss Crofton did an amazing job of pairing up the partners, my partner Isi and I got on really well from the get-go!  It was like having a sister in many ways because we got on so well and had so much fun.

I have definitely made a friend for life - we are still in contact with each other and talk regularly, which is great. The week was planned so that we would have a trip for both the SGGS students and the German visitors, and also separate trips for just the Germans. Together, we went to Blenheim Palace and they also visited Oxford, the Black Country museum and Anne Hathaway’s cottage. My family and I took my exchange partner to London where we had an amazing day out (despite the snow!)

Whilst I made a new friend I also had a lot of opportunity to learn lots of new words and phrases which I feel have been very beneficial for my language skills for my German GCSE. I would strongly recommend to anyone taking a language to be involved in an exchange programme and the SGGS German one is amazing - I have not only improved my German but I have also made so many precious memories and of course a friend for life.

I will be completing the second half of my exchange trip to Munich on the 10th of May and I am very excited to see Isi again and to immerse myself in German culture.

The benefits of an exchange programme can not be understated, both culturally and linguistically. We are so delighted to have found this amazing school in Germany, which seems to mirror our school in every way possible. Many of the girls, who have had the fabulous opportunity of taking part have made friends for life. This helps to foster understanding, tolerance and cultural awareness - Wir freuen uns alle auf Mϋnchen (Der deutsche Austausch)

I chose to take German as one of my languages in Year 8 because I had previously done it in primary school and I also liked the look of the school trips that studying German would offer. Out of all my trips at SGGS, the German Exchange in 2015 definitely had the biggest impact on my life, as it involved going to a foreign country and living with a family I had never met before!  I can remember calling my mum from the airport and crying as I was so nervous of what lay ahead, and feeling that maybe I had made a mistake to sign up to the German exchange.  However, Frau Stringer reassured me everything would be fine and told me that she would be there to support me night and day no matter what!  That definitely helped.  When we arrived at Dusseldorf airport and came through to the arrivals area I saw a huge, brightly coloured sign that read ‘Welcome to Germany Gwyneth’ and straight away my nerves subsided and I felt at ease and wanted by the family I was going to be staying with.

My exchanges name was Carolin.  She was 15 years old and her family consisted of her parents, her younger brother and an older sister.  Throughout the week, we visited the local German Markets filling our faces with gingerbread and bratwursts as well as visiting many sites such as Burg Castle.  Carolin and her family were very kind and considerate in catering to my needs and providing me with my own bedroom and bathroom for the week as well as taking me to the Imhoff-Schokoladenmuseum (The Lindt Chocolate Factory) and introducing me to my favourite German meal, Currywurst, at the weekend.

In that week of the German Exchange, I made a really strong friendship with Carolin, and although we didn’t necessarily have the same interests, we still managed to get along and create many amazing and unforgettable memories. Once home in the UK we stayed in touch by WhatsApp with conversations often involving asking each other questions about our German or English homework!  Indeed, keeping in contact meant we could stay up to date with what each of us was doing and that helped us to have a stronger bond when she came over with her school on the return leg of the exchange in April 2015.

During the exchange in the UK, Carolin and another exchange student Hannah formed a great friendship with me and my friend Lauren who was also on the trip.  In fact we all got on so well that Lauren and I flew out to Solingen in the Summer of 2015 for a week’s holiday.  It was great fun visiting the Ostrich farm, the water park and the zoo to name a few.

Carolin and I continued to stay in touch via Whatsapp on a regular basis.  Both families exchanged food hampers at Christmas – they enjoyed Cadburys chocolate and McCoys crisps and we enjoyed in particular the German gingerbread Lebkuchen.  We kept saying we would meet up again soon but other commitments were always in the way.  However, finally in August 2017, Carolin came and visited us by herself for just under a week. In that time we visited Oxford and toured the university colleges, Stratford Upon Avon (where we shopped and played mini golf) and Leamington Spa where we went for pizza and ate ice cream in Jephson Gardens.  We also went to London and visited the Sherlock Holmes Museum on Baker Street which was something Carolin had really wanted to do.  We then went to Oxford Street and Covent Garden before returning home absolutely exhausted!  The week could have not gone better and the weather was lovely and sunny.  Carolin and I had the best of times touring with one another. In the three years since first meeting Carolin, we are still in contact today asking each other about school and home life.  As a result, if I were to recommend any trip to go on at Stratford Girls’ Grammar School I would definitely recommend the German exchange trip or any exchange for that matter because for me, it resulted in gaining a new friend and creating new memories that I will cherish forever. 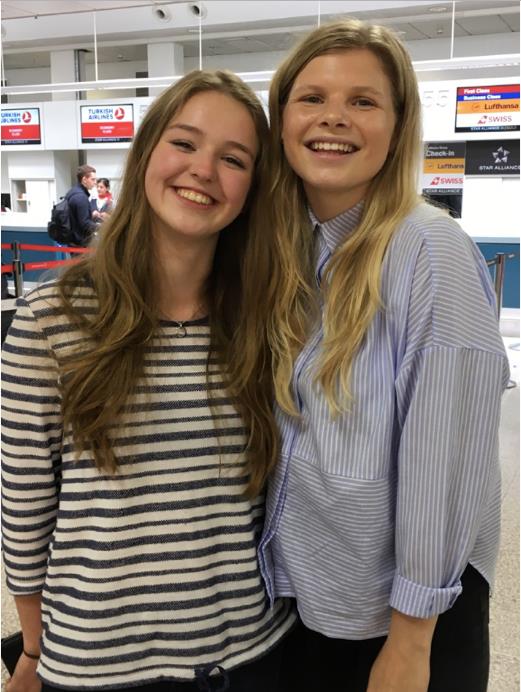 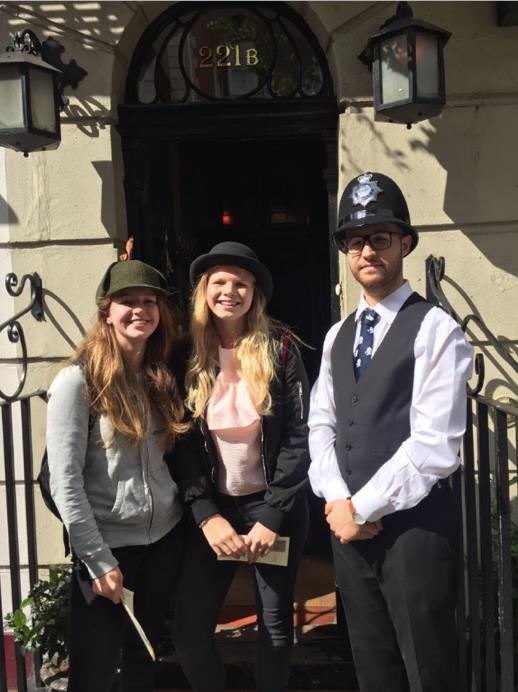 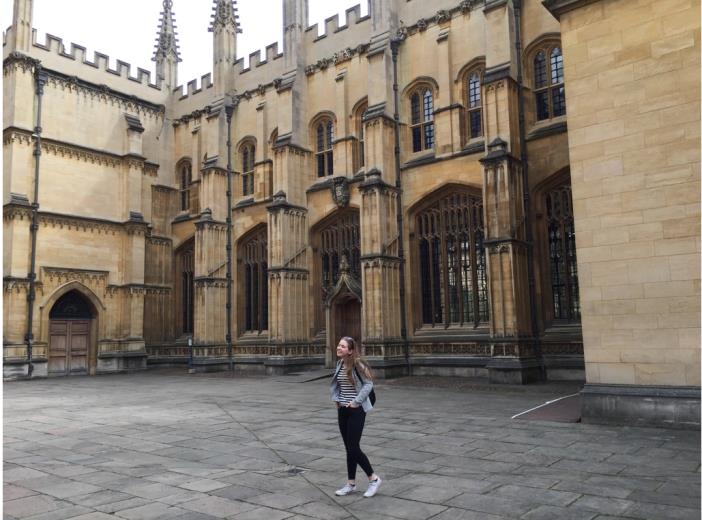