Year 9 'Poets of the Somme' 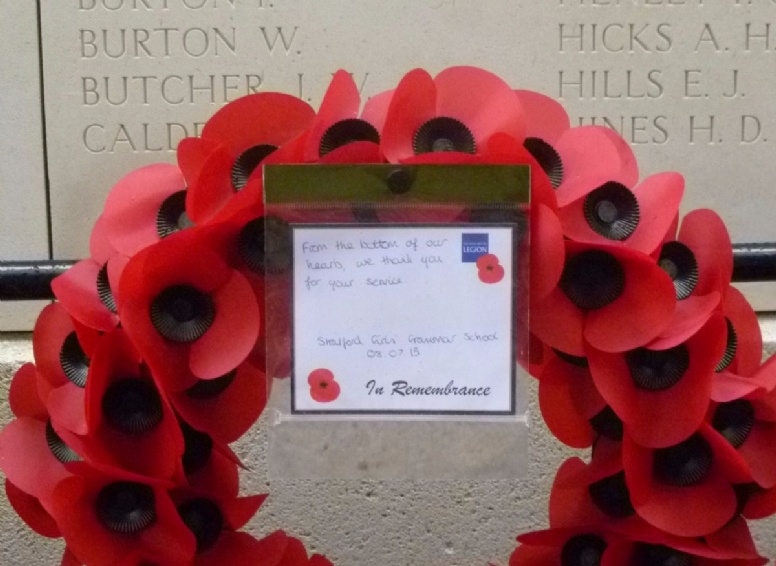 During Activities Week, 39 Year 9 girls went to Belgium and France to research and explore the Great War and follow in the footsteps of some of the Great War poets. Mr Giles tells us more.

We were based in Ypres for two nights, and led by our excellent guide Tony Smith, we toured the battlefields of the Ypres Salient. Our first stop was at Essex Farm where John McCrae penned In Flanders Fields.  Appropriately enough, there were poppies blowing in the wind as we read the poem at the field hospital where the death of so many had inspired this poem.

That same day we also visited Welsh poet, Hedd Wyn and Irishman Francis Ledwidge, where Amelia read one of his poems, War, at his graveside.  Then on to Yorkshire Trench with its reconstructed trench system. We stopped at Tyne Cot cemetery - the largest Commonwealth War Cemetery in the world.  Some girls managed to find the names of relatives on the walls which listed all those who had died but whose bodies had never been found.  We also visited Langemark, the German war cemetery.

In the afternoon back in Ypres, we toured the excellent In Flanders Field Museum, had the obligatory stop at the famous chocolate shop and attended the 29,999th Last Post at the Menin Gate. Anna, Ella and Sasha laid a wreath on behalf of the school for all who had fallen.

The next day we move to the Somme region of France, via Talbot House in Poperinge.  Talbot House was a rest house, open to all British and Commonwealth soldiers to relax, read, play the piano and reflect when they weren’t on the front line. We also visited the town cells and killing post where the British army executed deserters at dawn.

In The Somme we stopped at the Thiepval Memorial, a huge structure dedicated to all who had died in the Battle of the Somme in 1917.  We then took a small detour to a small cemetery as one of our girls, Caitlin, wanted to visit the grave of her Great, Great Uncle who had died in 1916 aged just 22.

That afternoon we also visited Newfoundland Park, where the Canadians had fought, and Lochnagar Crater, a huge hole in the ground, 20 meters deep and 80 meters across, created by tunnelling under the German trenches.

On our last day we went to visit Wilfred Owen.  Probably the most famous of the war poets, Owen had died one week before the war had ended (his mother had received a letter saying he had died on 11th November 1918),  First we stopped at the cottage where he spent his last few days, writing his last known letter home to his mother.  Amelia and Lily read a couple of his poems there and then Ella read Dulce et Decorum est at his graveside.

Our last stop on the way back to Calais was at Vimy Ridge, a place the Canadians had successfully attacked in April 1917.

Not your normal ‘fun’ activities week trip perhaps, but there is no doubt that during the one hundred year commemoration of the war to end all wars, our girls have experienced something that will stay with them for a very long time. 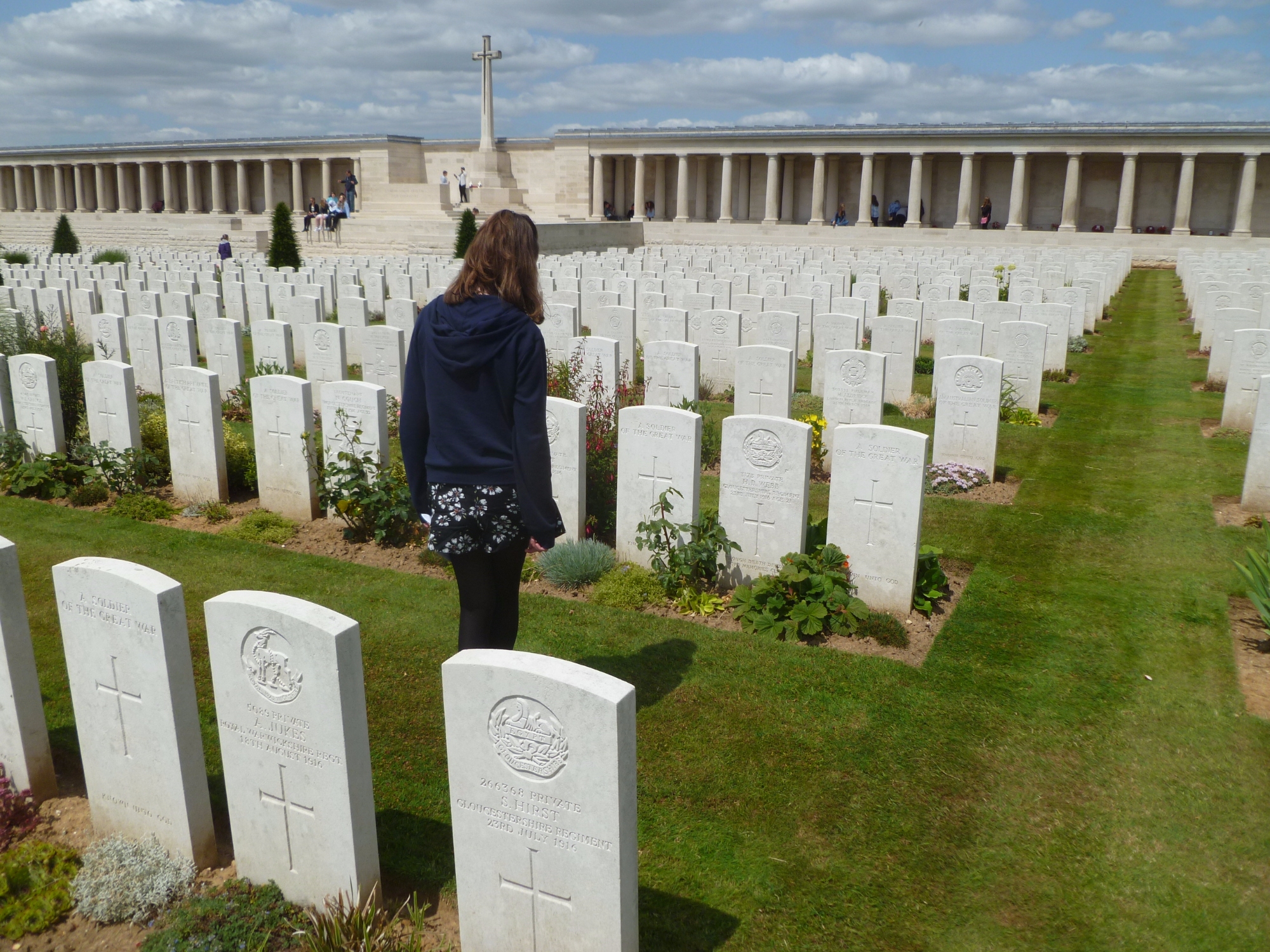 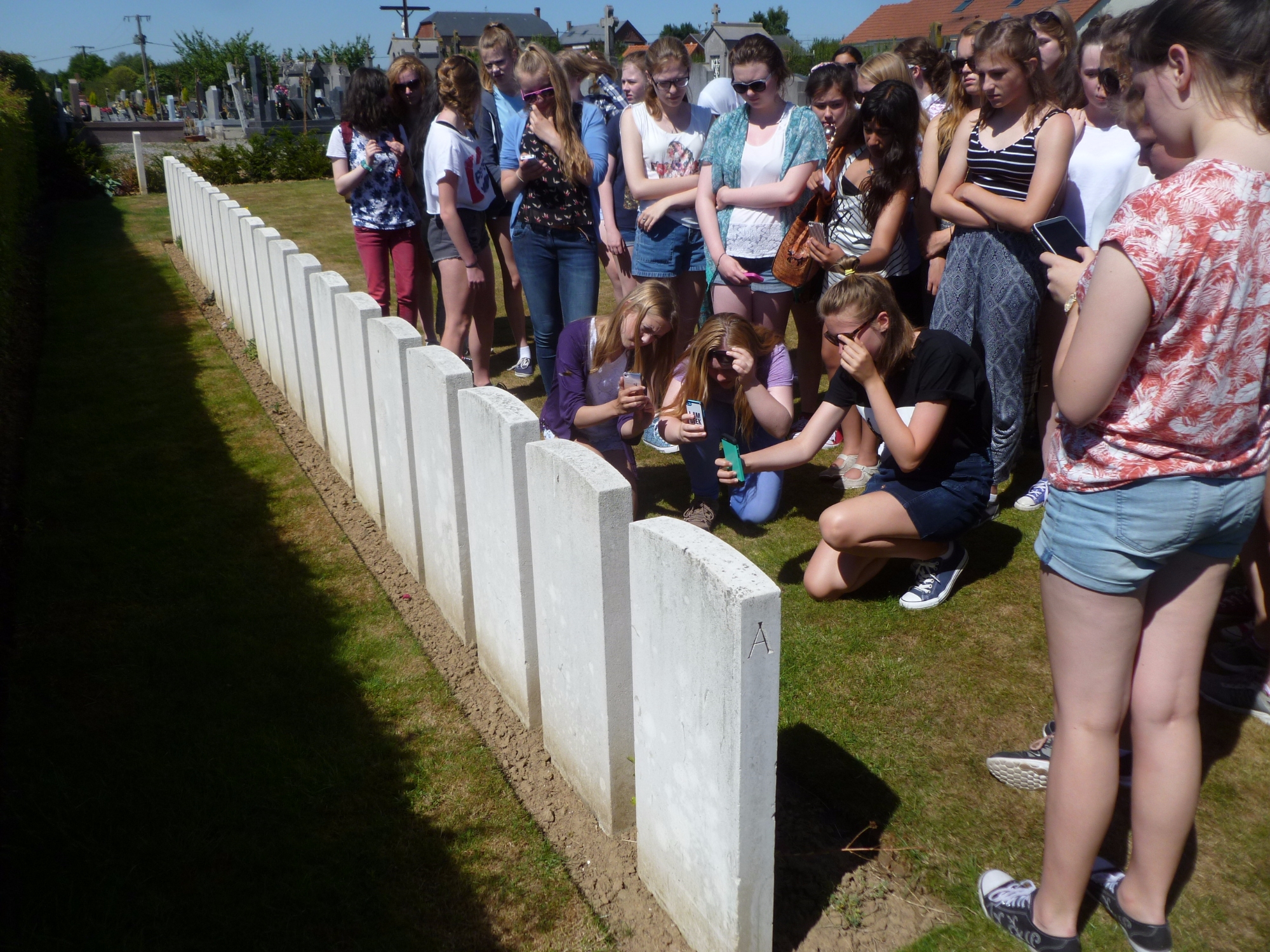