A Year 12 SGGS student, Abby Perks, recently had the opportunity to meet the author of some her favourite books and learn more about the man behind the novels. Below, Abby shares some of the insight she gained from the experience. 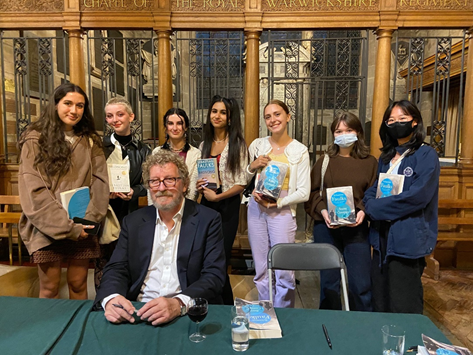 “The more we discover about ourselves, the less we know”: Sebastian Faulks

Sebastian Faulks is a well-known author of books including Engleby, Birdsong and his latest book: Snow Country. I visited his talk on Saturday, 11th September at St Mary’s church in Warwick. Faulks was previously a journalist, working with many newspapers. As a part of the ‘baby boomers’, he grew up with parents who had fought in World War One, and grandparents who had fought in World War Two. He spoke about how he believes, “If we read different books, we would be different people”, saying how he is who he is because of what he’s read, not the experiences he’s lived.

As a child, he loved books such as the Sherlock Holmes collection. However, he said that “the best stories are in the bible”, which was fitting for an event in a church. Faulks also mentions that he adores European culture and that he “only finds ideas for stories coming to him in a village in France’(or Austria - per his latest novel).

Faulks is an extremely popular author. When talking about his books, he categorised them into ‘older’, which ask “how did we get to this point?” and ‘newer’, tackling “not who are we, but what are we, and why are we so odd”. One of the ‘older’ books is Birdsong, a book commonly studied at SGGS and other Sixth Forms for A Level. This book looks into the idea of humanity being compromised and through the men in the novel, delves into the themes of comradeship and friendship; looking at what is important in these themes, which for him, included sexuality and experience. Another of his famous ‘older’ novels, released in 2007, was Engleby. This book feature’s themes of mental illness and how it develops, mentioning that the ‘voice’ of the main character came to him, and he dug deep into that voice to search for his story. Faulks mentions that he sees Engelby as his “evil alter ego”, showing his personality shine in his books, and his familiarity and closeness in his characters.

Snow Country is Faulks’ latest novel. It is both a standalone novel, and a follow-up to ‘Human Traces’, released in 2005. It is a love story, with 3 major characters, beginning in 1910 Vienna. One of the three main characters, Anton, is a romantic student, living in Vienna. He grew up with a sheltered upbringing and was appalled by the prostitutes in the city; seemingly shocked by the line drawn along the pavement, which the girls had to stand behind to let ‘regular’ pedestrians pass - coining the term ‘line girl’. Another one of the main characters is named Lena (pronounced Lay-na, not Leena, as importantly noted in the author’s notes section of the book.) growing up with an alcoholic mother, not prospering at school. However, one thing that sets Lena apart is that she feels entitled to a life and believes that she deserves love.

Faulks was inspired to write this novel when he stayed with his friend in Austria, his friend residing in a 1 room house on the lake, with Faulks staying in the hotel opposite. He decided that ‘this is where it could happen’ and used his experience to begin to create the book, creativity being stirred that isn’t in England.

To conclude, this experience was enriching for me both academically and culturally. I have learnt a lot, especially applying context for my A-Level English studies, but also from exploring new perspectives into how people live their lives – based on the books they read and not just the experiences they live through. I feel as though this is an extremely important view to hold, as the knowledge we gain from books is incredibly important and enriches the way we live.