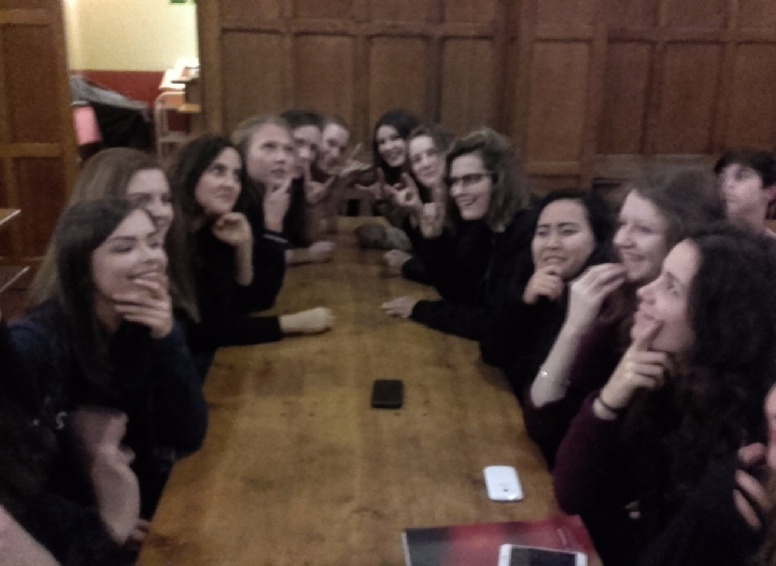 Philosophy students attended a conference in Nottinghamshire over half term, and Year 12's Issy gives us an overview of the fantastic day they had.

Although it is rare not to start a trip write-up chronologically, I think that it is important to note that, at the end of the trip, we found out that it had taken the organisers at Worksop College one and a half years to set up this philosophy conference.  With renowned keynote speakers, interactive workshops and innovative seminars and lectures, there is no doubt that we were incredibly lucky to have been exposed to the cutting-edge philosophy of the twenty-first century.

Having arrived at Nottinghamshire’s version of Hogwarts (or maybe the Harry Potter marathon on Sky this week relit everyone’s desire to live like Hermione Granger), we were hit with the question, ‘What does it mean to fulfil human purpose?’  Peter Vardy proposed the idea that the existing paradigm that matter is primary is breaking down, that senses and language are prisons and that there’s a gap between quantum science and matter, where, supposedly, consciousness is held. In the following seminar, we explored the question of human purpose more, discussing human awareness of morality and ability to ask questions, leading to the inevitable topic of the social structure of ant colonies (!).  The seminars were a great opportunity to collaborate with students from other parts of the country and put forward ideas in smaller groups.

The second lecture from Nigel Warburton was about John Stuart Mill’s book, ‘On Liberty’.  It expresses Mill’s views on utilitarianism; it discusses dissent and the danger of dogma (the ‘deep slumber of unchallenged opinion’). Mill believed in the importance of free speech and wrote about ‘The Harm Principle’; this suggests that you can do what you want as long as it doesn’t ‘harm’ someone else, although, in the seminar afterwards, some of us were challenging his view that harm is only physical and that ‘offence’ doesn’t count because there’s a direct link between offence and violence. However, Warburton suggested that Mill would argue that one cannot be held responsible for how someone responds to your words, whereas the physical pain involved in harming someone is unquestionable. In fact, Mill encouraged the ‘collision of truth and error’, where challenging ideas, through philosophy, allows for change in society.  Therefore, fallibility in humans increases utility and freedom. I found this lecture particularly interesting and useful for the Philosophy and Ethics course because John Stuart Mill is someone we study.

The sense of free will and expression was then questioned after lunch by Professor Raymond Tallis.  He began his lecture by introducing the idea of biologism, which suggests that human beings are essentially biological organisms and that consciousness is neural activity.  Apparently, neuroscientists suggest that free will is an illusion because our reasons for doing things come from anterior forces that we can’t control.  This is supported by the observation that the brain’s ‘readiness potential’ occurs before the time of awareness of intention.  Tallis described neuromania and darwinitis (which sounded more like diseases than theories to me!): neuronmania suggests that the brain can explain every aspect of behaviour and darwinitis suggests that evolution can explain human nature, where our ‘biological roots’ and ‘cultural leaves’ have developed from natural selection.  However Tallis accuses neuromania of simplifying emotions; for example, love cannot be triggered by a standard stimulus and it is not a steady state like temperature. He ends his lecture comparing man and beast: where beasts feed, humans dine; humans practice their learning; beasts organically live their lives, humans live out their lives. This shows his position that, although an atheist and, until recently, a physician and clinical scientist, he believes that science can’t tell us everything about the world around us.

Directly after this, we heard from Richard Swinburne (much to Mrs Steele’s excitement!).  Swinburne’s position on ‘substance dualism’ – that each human consists of two parts, the body and the soul – is opposed by most modern philosophers and scientists, so it was interesting to hear his reasons for carrying the more traditional views of Christianity. He said that ‘physical properties’ and ‘pure mental properties’ (thoughts and feelings and the causes of thoughts and feelings) would not be enough for an alien to distinguish between different people. He used the example of a half-brain transplant, where, if you were to switch right hemispheres of the brain with your twin, which person would you be?  We can never know because no scientific experiment could reveal the answer; therefore, your identity isn’t determined by your brain.  He then went on to say that a substance made up of the same parts as another substance must be the same substance, but since human identity isn’t determined by physical or mental properties, humans must possess a ‘non-physical part, a mental substance, that is a soul’.  Raymond Tallis had some problems with this by asking questions such as, ‘If I move three metres forwards, does my soul move with me?’ In the final seminar of the day we discussed the concept of how a metaphysical soul would be connected to our physical bodies and other famous philosophical paradoxes such as The Ship of Theseus.

I think now is a suitable time to mention the delicious food!  It is certainly fair to say that our stomachs were fed as well as our minds on this trip…!

So, after a satisfying supper, everyone from Shottery formed a group to talk about the question, 'Is the purpose of life to be happy?’ We analysed the question, discussing whether there needs to be a purpose of life and what it means to be happy.  Then we split into smaller groups to make a poster and my group raised issues such as whether knowledge or ignorance leads to happiness,  Bentham’s higher and lower pleasures, the difference between happiness and contentedness and being driven towards artificial forms of happiness.  We were given an interesting view that you can only judge happiness by your reflection of your whole life; this seemed like quite a cynical approach, as it is suggesting that you can never live with happiness.

I found the first lecture the next day by Angie Hobbs the most interesting; she started with the question, ‘Can you step in the same river twice?’  If the river is defined by the water running through it, then surely it isn’t that same river. How can we give stable, unchanging names to unstable objects?  This leads to the question of whether you are the same person you were a year ago as a result of the regeneration of cells and the new memories that you have acquired.   Perhaps there is just a swirl of change and no separate things; we just create identities to understand things we can’t actually pin down because we aren’t capable of understanding the complex design of the world.  Therefore, she asked, what is knowledge if everything is always changing?  Knowledge is relative to a person’s position.  Yet would knowledge necessarily be perspective where both the perceiver and the perceived are always changing?  Hobbs then discussed the views of the Greeks, Heraclitus and his student, Cratylus; they believed in the ‘swirling world’ in which language can’t actually exist. Mr Giles took inspiration from this, deciding to - like Cratylus - sit in his lessons silently, for language is useless in expressing a world of changing objects…!  In the seminar, the ‘winning’ view in our debate was that the identities we give things are not just in reference to that specific moment in time; for example, when calling someone a name, you are referring to their whole – continuously changing – existence rather than their physical state in front of you in that second.

Michael Lacewing’s lecture was about moral relativism. This is the idea that the only moral standards that there are are ones society endorses, therefore you can’t say that one society’s moral values are objectively right or wrong. He then put the idea of relativism against this idea of respecting and being tolerant of separate societies: tolerance of other societies is an objective moral truth, yet relativism says that there are no objective moral truths. We were being made to question how to act morally in relation to other societies; if the idea of being tolerant of others is universally respected as being ‘moral’, perhaps we shouldn’t force these views on others because our morality depends on the society we were born into. When we were able to reflect on some of these ideas, we discussed the obligation to intervene in places like Saudi Arabia and how, if everyone in history were a moral relativist, then no one would have taken the ‘moral authority’ to change discriminative laws, for example.

After lunch, Jonathon Wolff also talked about the structure of society and also how justice is distributed.  He described Benjamin Roundtree’s discoveries against the conservative view in York at the time that there was little poverty because of the low levels of unemployment. Roundtree judged wealth by ‘physical efficiency’ (the ability to eat healthily, own clothing and shelter), which he found most people to be below the line of. He observed that people were living in secondary poverty, where they had enough money for physical efficiency but were spending this money on social needs such as birthday parties and Christmas presents. Adam Smith – an economist and philosopher – introduced ‘relative poverty’: people are pushed into poverty by trying to avoid not being able to live up to society’s expectations. After the lecture, we were lucky enough to be joined by Jonathon Wolff in our seminar.  The discussion turned to the topic of grammar schools and we were given his perspective on the development of a market for expensive tutoring that was defeating the point of grammar school education.

Our final seminar of the trip would introduce some of the ideas put forward by Julian Baggini, the final lecturer. We were given two grapes and were told which one was organically produced. When asked which one tasted better, most people in the room voted for the organic one. After this vote, we found out that they were both normal grapes. This experiment proved that eating involves the body and the mind.  Baggini’s lecture was about the practice of being ‘good’ so that it becomes a habit; one of the little things that practices the habit of being good is, he said, what we eat. He described what he thought were important things to consider when eating: showing the right amount of compassion (towards animals in farms and labourers in fields), taking the appropriate level of responsibility for the food that is being produced and striking the balance between gluttony and Puritanism in terms of satisfying desires and pleasures. The philosophy of food was shown to be an important moral issue as well as making everyone hungry!

By the end of our last lecture, everyone was exhausted from the thought-provoking views of some of the leading thinkers of our generation.  If you’ve managed to reach the end of this write-up (!), Mrs Steele and Mr Giles deserve a special thank you for giving up their time in half term to supervise us on this trip!  It was undeniably an extremely special experience! 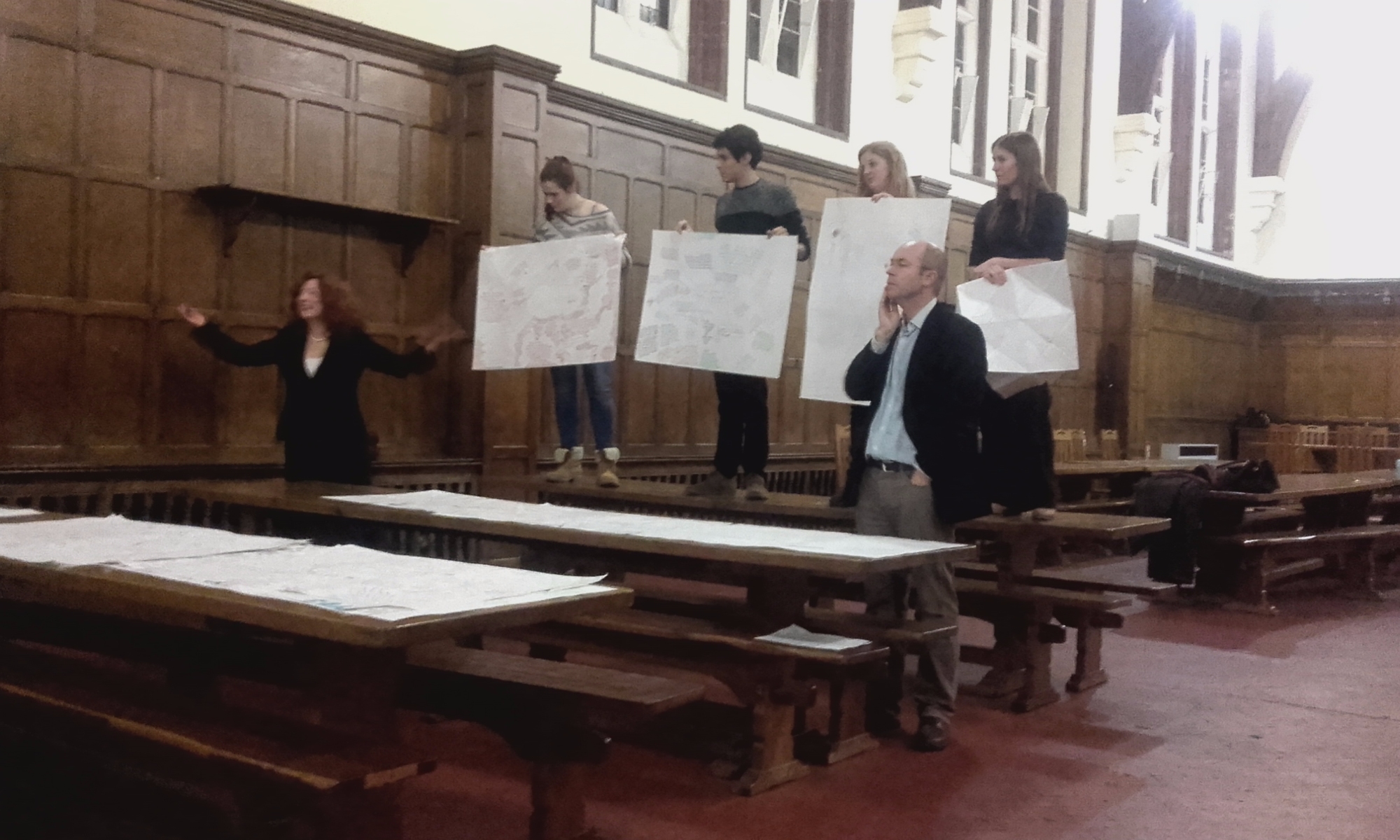